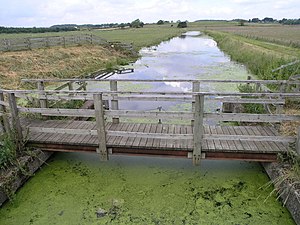 Dam on the River Skerne 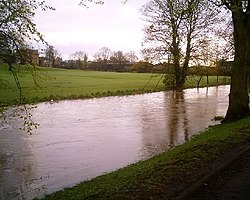 The Skerne in flood

The River Skerne is a tributary of the River Tees in County Durham. It is a lowland river in the east of the county, rising in the heart of the coal country and flowing twenty-five miles down to the Tees at Hurworth Place.

The source of the Skerne is in the magnesian limestone hills between Trimdon and Trimdon Grange.

Three miles west of Fishburn, the river is crossed by the A1(M) motorway near Bradbury interchange. At this point the Skerne takes a southerly course and, for about five miles as far south as Aycliffe, from where its valley is followed by the motorway and the East Coast Main Line. A number of smaller tributaries join the Skerne in the area and often form little islands like the Great Isle and Little Isle near Bradbury. One major tributary of the Skerne is the Woodham Burn, which rises near Shildon and flows through Newton Aycliffe.

The Skerne skirts the village of Aycliffe before crossing under the motorway near its junction with the A167. After this it passes close to Brafferton and the farmland where the famous Durham Ox was bred, before heading for Barmpton, Great Burdon and Haughton-le-Skerne on the outskirts of Darlington.

IN Darlington, the Skerne flows underneath 17 bridges. The river lends its name to the Skerne Park estate in Darlington.

To the south of Darlington the Skerne passes through South Park, and then, after flowing under the A66 bridge, leaves the town to flow through countryside for its last two miles before joining the Tees at Hurworth Place.

The River Skerne underwent a comprehensive restoration scheme between 1995 and 1998 as part of a project carried out by the River Restoration Project (now The River Restoration Centre).[1] A mile-long stretch of the river running through the town of Darlington was improved including the formation of four new meanders, planting to strengthen banks, reshaping and narrowing of the bed, installation of footpaths and a planting scheme aimed to "bring the countryside into town".[2]