Newton Aycliffe is a town in County Durham founded in 1947 under the New Towns Act of 1946 making it one of the oldest new towns in the United Kingdom. The town's motto is Latin for "Not the Least, but the Greatest we seek".

It has a population of 29,000 people[1], other reports put the population between 23,000 and 25,000. To the south of the town is the village of Aycliffe, the original village which gave the new town its name. Within a 10-mile radius are several towns and villages including Darlington, Bishop Auckland, Shildon and Heighington.. Newton comes from 'New Town'.

Long before the new town development, Aycliffe (originally 'Acley') was the site of an Old English village of Acleg ("oak clearing"). (The variant 'Yacley' has been used too.) Aycliffe was the location of church synods in the years 782 and 789.

The coming of the railway

On the edge of the town is the Bishop Auckland to Darlington railway branch line which is part of the 1825 Stockton and Darlington Railway. George Stephenson's steam locomotive Locomotion No 1 was placed on the rails close to Newton Aycliffe near to where Heighington station is. Soon after, the ralways came in earnest and although Aycliffe's growth was modest, it laid the ground for the larger development after the Second World War.

The Great North Road passes through the town, though in 1969 the A1 was diverted as a bypass.

In more recent times Aycliffe was a key element in Second World War ammunitions manufacturing. The marshy land was ideal cover against the Luftwaffe as it was almost continually shrouded in fog and mist. Huge grass-covered munitions factories were built and serviced by the nearby railway lines. The factories were largely staffed by women (in their thousands); these ladies were dubbed the "Aycliffe Angels", who braved incredible dangers inside the factories.

In 1942 was published the Beveridge Report, making proposals for the future after the War. Beveridge's most conclusions led to the Welfare State, but Aycliffe had a particular place in Beveridge's vision as he wished to use it as a model for his vision; the shining example of how his new world would work. On the moors between Aycliffe and Middridge was a huge ordnance factory that was no longer needed for the war, and there was plenty of poor farmland to build on. It is where Beveridge chose his flagship new town - Newton Aycliffe. Rarely for such visionary projectors, Beveridge actally moved to the town he created and had a house at the top of Pease Way.[2] 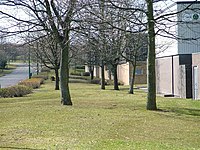 The factories were eventually replaced by manufacturing buildings that became the industrial district of Aycliffe. After the war many companies moved onto the industrial estate, including Great Lakes Chemicals, which retained the munitions factories until 2004 when it was closed and demolished, along with these original factories used by the Aycliffe Angels. Also there were Eaton Axles, and B.I.P., who were to become two of the largest employers of the town until the early 1980s. One other company was Union Carbide. Eaton Axles closed down and shipped itself to Poland, B.I.P. is now Hydro Polymers, Union Carbide was taken over by Sanyo for several years, but this has now closed. Businesses currently located in the town include Flymo, 3M and Ineos (who have taken over Hydro Polymers) with many more small factory units.

From its start Newton Aycliffe kept expanding in size, until 1980 when the council stopped building council homes. Since then private houses and housing associations have been building the town's homes. From c. 1983 an area of private housing called Woodham Village was built. 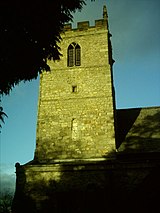 The town has a large industrial estate to the south of the town, split into three.

There are no "streets" in Newton Aycliffe (no places of residence with the suffix 'street'.). The main road which runs through the centre of the town is 'Central Avenue'. There are many Roads, Closes, Crescents and even a Parade. In the older parts of the town the streets are named after Bishops of Durham and Saints: Van Mildert (road); St. Aidan's (walk); Biscop (Crescent). Some are named after prominent local families; Shafto (way), Eden (road), and Bowes (Road) for example. Even named after the leaders of the New Town Movement such as Lord Lewis Silkin (Silkin Way) and Lord Beveridge (Beveridge Way).