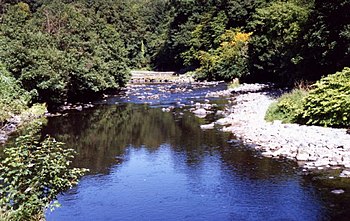 The River Roe in Limavady

The River Roe is found in County Londonderry, and is the main river of the town of Limavady. It rises in the Sperrin Mountains and makes its way to the sea in Lough Foyle.

The Roe flows northwards from Glenshane in the Sperrin Mountains to Lough Foyle, by way of the settlements of Dungiven, Burnfoot, Limavady and Myroe.

The origin of the name 'Roe' is unclear. Suggestions include a Viking origin from the 8th/9th century, or the Irish rua, meaning 'red', which may be a reference to the high amounts of iron found in some places along the river.[1]

The Roe Basin (or Roe Valley) is a wide, glacial valley. The river flows most of the way to Limavady through an open, grassy, pastoral farmland landscape before narrowing through a metamorphic rock gorge within the Roe Valley Country Park.[2] Beyond Limavady the river widens and meanders to an estuary feeding into Lough Foyle at Myroe Levels. Due to the wide, open nature of the upper reaches of the Roe, heavy rainfall can result in large surges of water. Many lower lying fields have earth defences to prevent flooding when the river rises above its natural banks. The estuary is a feeding ground of many birds and nesting area for lapwings.

The Roe Valley Country Park is a popular area for fishing, with stock of salmon, sea trout and brown trout.[3]