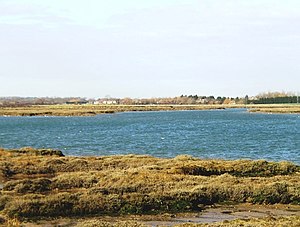 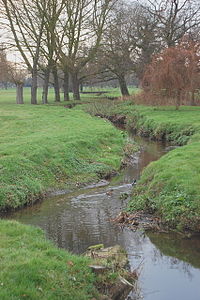 The River Roach is a river of Essex, one those whose course shapes the complex network of creeks, marshlands and islands on the county's east coast. It begins as a modest stream, running west to east north of Southend on Sea before opening into a broad tidal channel at the town of Rochford. It joins the tideway of the River Crouch between Wallasea Island and Foulness Island.

Rochford takes its name from ryðða ford, Old English for 'Mastiff Ford'. The River Roach was originally called the "Walfleet" or "Walflete" and it is believed that it was renamed the 'Roach' as a back-formation from the name of the town, as if 'Rochford' were 'ford over the River Roach'.

The River Roach has its source near Bull Wood and Hockley Woods in Hockley. It rises in the hill near The Gattens and Nelson Road, which are either side of Hockley Road, Rayleigh. The Roach then runs south, under Bull Lane, beside then under The Chase where it turns to run east behind Milton Close and Bramfield Road East. It the passes north of the Grove Playing Fields, then past Rayleigh Sewage Works where its flow is augmented by the discharge from the reed-bed purification system. It runs south of Rawreth Hall Wood, north of Grove Woods, past New England Wood. From there, through the Cherry Orchard Jubilee Country Park, past The Scrubs (wood), under Cherry Orchard Way (B1013), past Southend Airport and on through Rochford Hundred Golf Course into Rochford where it joins the Hawkwell Brook beside the Rochford Lake.

Passing under South Street beside the Horse and Groom public house, the River Roach then continues east, running through flood plain marshes before discharging into the northern arm of the River Roach at Stambridge Mills, less than a mile downstream from the town. Just after this point, the Roach passes Sutton Wharf with jetties, slipways, a boatyard and moorings. This is where its main tributary, the Prittle Brook from Leigh on Sea and Southend on Sea joins as its southern arm.

From Stambridge Mills eastwards, the River Roach is tidal and becomes a wide river. It passes Great Stambridge Hall, Mucking Hall, Barton Hall and Roper's Farm. Barlinghall Creek joins it at The Violet and from here the Roach is now about a quarter of a mile wide. It passes Paglesham, famous for its native oysters and the location of Charles Darwin's HMS Beagle which lies under the mud west of Paglesham's boatyard and slipway.

Further east, the tidakl stream meets Paglesham Creek which separates Wallasea Island to the north, then at Potton Point on Devil's Reach, the Middleway creek joins from the south and defines the western edge of Foulness Island. This part of the Roach was called "The Bromhill". The Roach passes eastwards between Foulness Island and Wallasea Island and then it turns northwards between them, where it widens to almost 650 yards until it joins the River Crouch at Wallasea Ness on the Ness Hole. The combined rivers then flow eastwards past Holliwell Point and discharge into the North Sea at Foulness Point.

The River Roach is part of the River Crouch and Roach tidal river system which includes all of the creeks around Wallasea Island, Foulness Island, Potton Island, New England Island, Havengore Island and Rushley Island. The tidal flow around the creeks between those latter islands considerably affects the tides in the River Roach. Those creeks and tidal flows also enhance the River Roach's habitat and conditions for oyster cultivation and fish spawning.

The Roach from the air 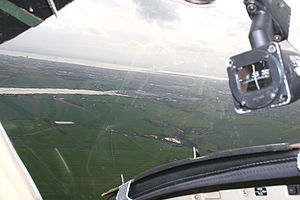 Aircraft on final for runway 24

Light aircraft based at Southend Airport use the Roach as a navigation aid to guide them back to the runway: the Roach flows past Purdeys Industrial Estate, Rochford, which is very close to the threshold of Runway 24. Pilots returning from a flight north east of the airport use the Roach to help align themselves with the runway.