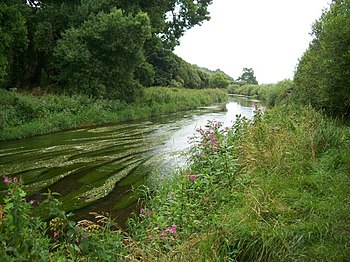 The River Otter by Otterton

The River Otter flows for twenty miles, mainly through Devon, to reach the sea in Lyme Bay. The river gives its name to a number of villages on its course, the largest of which is Ottery St Mary.

The river rises in the Blackdown Hills on the border of Somerset with Devon near Otterford. From here it flows south, forming the county border for its first two mile before entering Devonshire alone by Churchinford and running through the eastern part of that county until it enters the English Channel in the western end of Lyme Bay (at SY073820).

The Permian and Triassic sandstone aquifer in the Otter Valley is one of Devon's largest groundwater sources, supplying drinking water to 200,000 people.

The course of the river

Bridge over the Otter at Otterton 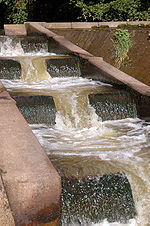 The river's source is north of Otterford, where a stream feeds the Otterhead Lakes (ST225152) and then through Churchstanton before entering Devon.

This is a rural river, through meadow and pasture. The largest town in the Otter Valley is Honiton.

Tourism and leisure play important roles in the economy.[1] For much of its length, the river flows through two 'Areas of Outstanding Natural Beauty' – the Blackdown Hills AONB (to the north of Honiton) and the East Devon AONB (to the south of Ottery St Mary).

The river passes through or by Upottery, Rawridge, Monkton, Honiton (then below the A30 trunk road), Alfington, Ottery St Mary, Tipton St John, Newton Poppleford, Otterton and reaches the coast to the east of Budleigh Salterton, after flowing through the 57-acre Otter Estuary Nature Reserve, consisting of tidal mudflats and saltmarsh.

There is no public access to the estuary itself but footpaths lead alongside with two viewing platforms on the west and two hides one on the west and one on the east. The wintering population of wildfowl and waders includes redshank, greenshank, dunlin, common sandpiper, ringed plover, grey plover, curlew, snipe, water rail, wigeon, teal, shelduck, brent goose, red-breasted merganser and little grebe. Reed warbler, reed bunting and sedge warbler breed on the reserve.

The Environment Agency measures the water level of the Otter and its tributaries at six or more "river level stations".[2]

The point at which the river reaches the coast is part of the Jurassic Coast, a World Heritage Site.

A small tributary is the River Tale, with the confluence north-west of Ottery St Mary, famous (or infamous for Samuel Taylor Coleridge, Sir Walter Raleigh and the Bonfire Night tar barrel event). Here there is an unusual circular weir, known as the Tumbling Weir.

Another small tributary is Budleigh Brook, which joins the Otter at East Budleigh.

At one time there were as many as fifty watermills powered by the River Otter. One of the remaining working mills, thought to date from the 17th century, is Tracey Mill near Honiton. In the 1970s, fish ponds were dug around the mill, fed by the leat; over a million gallons of fresh water flow though these ponds every day, helping the commercial production of trout "without the need for antibiotics or added oxygen".

One mill, at Dotton, is known to have operated from around 1100 to 1960, after which the building was demolished. The site was excavated by Channel 4's archaeological television programme Time Team, the episode "The Domesday Mill" being broadcast in 2007. This mill is mentioned in the Domesday Book. A weir diverted water to the mill's leat, supplying the vertical breast-shot wheel.

Dotton (now little more than a farm) is four and a half mile from the mouth of the Otter, and about one mile north of Colaton Raleigh. 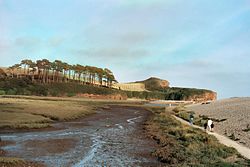 The tidal estuary of the Otter

The village of Otterton was once a seaport on a larger Otter Estuary. Here stands Otterton Mill, a working watermill over 1,000 years old; it was one of the three largest mills in Devon as recorded in the Domesday Book of 1086. It is powered by water diverted through a leat. Immediately north of the leat, a fish pass or fish-ladder has been constructed beside a river-wide weir, restoring migratory fish runs to the river after a break of over 100 years.

The poet Samuel Taylor Coleridge (1772–1834), who was born in Ottery St Mary, wrote a poem to the river, entitled "Sonnet to the River Otter".

Dear native brook! wild streamlet to the West!
How many various-fated years have past,
What happy, and what mournful hours since last
I skimmed the smooth thin stone along thy breast,
Numbering its light leaps! yet so deep imprest
Sink the sweet scenes of childhood, that mine eyes
I never shut amid the sunny ray,
But straight with all their tints thy waters rise,
Thy crossing plank, thy marge with willows grey,
And bedded sand that, veined with various dyes,
Gleamed through thy bright transparence! On my way,
Visions of childhood! oft have ye beguiled
Lone manhood's cares, yet waking fondest sighs:
Ah! that once more I were a careless child!

At Ottery St Mary the river is spanned by a foot and cycle bridge 312 feet long named 'Coleridge Bridge', which was built at a cost approaching £1 million and opened on 29 August 2011. A small area of land at one end of the bridge was sold to the local authorities by Lord Coleridge, a descendant of the poet.

The Otter is the only river in Britain known to contain a breeding population of beavers, a species that died out in Britain in around 1550. The origin of the population is not known; it was first noticed in 2013, apparently successfully bearing three kits the next year.[3][4]

Following concern from local landowners and anglers, as well as farmers worrying that the beavers could carry disease, the government announced that it would capture the beavers and place them in a zoo or wildlife park. A sport fishing industry lobbyist group, the Angling Trust, said "it would be irresponsible even to consider re-introducing this species into the wild without first restoring our rivers to good health."[5]

This decision to immediately remove the beavers was protested by local residents and campaign groups, with environmental journalist George Monbiot describing the government and Angling Trust as "control freaks": "I'm an angler, and the Angling Trust does not represent me on this issue...most anglers, in my experience, have a powerful connection with nature. The chance of seeing remarkable wild animals while waiting quietly on the riverbank is a major part of why we do it."[6][7]

The introduction of beavers to rivers has been encouraged by environmentalists, who have argued that beaver dams provide a habitat for birds and fish, reduce the strength of flooding by trapping water high up in a catchment area, away from homes further downstream, and could be a future tourist attraction. A local councillor, Claire Wright, was quoted as commenting, "The decision to let them stay should be made by the community, not by officials from London. There is a lot of support locally for them remaining on the river and general bafflement about why Defra would want to remove them." [8]

On the 28 January 2015, Natural England declared that the beavers would be allowed to remain on condition that they were free of disease and of Eurasian descent (not North American beavers, which would be invasive). These conditions were passed, and the beavers were returned to the river as part of a five-year trial scheme.[9]