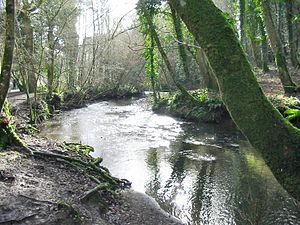 The River Lemon is a river ten miles long in Devon; a tributary of the River Teign, which it enters in Newton Abbot.[1]

The river rises on the south-east side of Dartmoor near Haytor, joins with the River Sig and the Langworthy Brook at Sigford, then passes the village of Bickington. Lower down, it is joined by the Kestor Brook and it then flows through the woods in Bradley Valley, past the manor house of Bradley, and through the town of Newton Abbot where it flows through a tunnel 400-yards long below the town centre. Just below the town, the river joins the River Teign (50°31’1"N, 3°36’25"W), near the head of the Teign Estuary.

The name 'Lemon' is a derivative of a Celtic word meaning 'elm'.[2]

The river has several times caused major flooding in Newton Abbot, most notably on 19 December 1853, 14 November 1894, 6 August 1938, and 27 December 1979. To prevent further occurrences, a flood-control reservoir and dam were built in 1982, just below the confluence with the Kestor Brook at Holbeam.

In December 2013, a flood drowned a local primary school teacher, who died while trying to rescue his dog from the river.[3].

During its operation from 1898 to 1974, the Newton Abbot power station discharged its used cooling water into the Lemon, having extracted it from the River Teign.

Puritan's Pit, located in the valley of the River Lemon, and notable as a place of worship for nonconformists in the 17th century