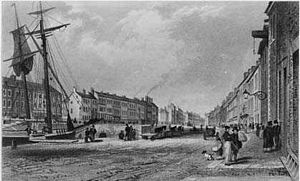 The River Farset is a river running through Belfast and which gave the city its name, though now it is culverted and flows as a subterranean river. It is a late tributary of the River Lagan, on the north bank of the river wholly in County Antrim.

The Farset rises within the cityscape, above Legoniel. Anciently it flowed past the mediæval parish church at Shankill, through Millfield and under High Street, giving that street a curving appearance, and finally entering the Lagan to the east of the Albert Clock and High Street.[1] It is on the County Antrim side of the Lagan and its entry to the Lagan is close to its outflow into Belfast Lough. The Farset is now contained within a tunnel under Belfast's High Street; a tunnel supposedly big enough to take a bus.[2]

Belfast was founded at a sandy ford across the Farset, and this is the origin of the city's name - Béal Feirste, meaning 'Mouth of the Farset'. The name 'Farset' itself comes from an Irish word meaning 'sandbar'. Among the early references to the ford is of a battle between Ulaid and Picts in 667. Much later a Papal Taxation Roll of 1306 refers to 'the chapel of the Ford'.

The banks of the Farset became the first quaysides of the developing merchant city and the river flowed beside docks on High Street in the 19th century.[2] In the late 18th century it was one of many Belfast rivers which provided the power for early industrialisation by powering factories and supplying water for bleach greens.[1]

In the 17th, 18th, and 19th centuries, the river was sometimes known as Belfast River, the River of Belfast, the Town River, or the High Street River.[3] Over the course of the 18th century it was gradually covered over; the final section, close to Princes Street, was covered over in 1804.[4]