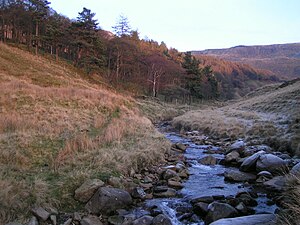 The River Kinder above Kinder Reservoir

The River Kinder is a small river, only about 3 miles long, in the Peak District of northwestern Derbyshire.

From Kinder Scout, the infant river flows generally westwards to its confluence with the River Sett at Bowden Bridge. On its course it flows through the Kinder Gates rocks, over the waterfall known as Kinder Downfall, and through Kinder Reservoir, built in 1911 by the Stockport Corporation Water Works.[1] 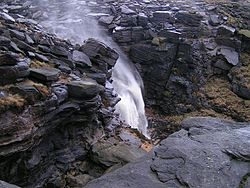 Kinder Downfall is the tallest waterfall in the Peak District, with a 100-foot fall. The waterfall was formerly known as Kinder Scut, and it is from this that the plateau derives its name. Although usually little more than a trickle in summer, in spate conditions it is impressive. In certain wind conditions (notably when there is a strong west wind), the water is blown back on itself, and the resulting cloud of spray can be seen from several miles away.

The Pennine Way crosses the River Kinder above Kinder Downfall. 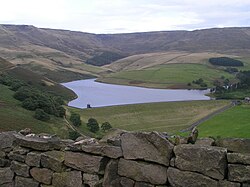 In 1899, Stockport Corporation acquired Stockport and District Waterworks Company, gaining control of the town’s water supply. They immediately investigated potential new water supplies. They decided to build a new reservoir two miles upstream of the village of Hayfield at the head of the Kinder valley. Abram Kellett of Ealing was contracted to build it.

The associated standard gauge railway required two Acts of Parliament. The geological difficulties prompted a change in design from a masonry dam to a clay/earth dam. The first consulting engineer died and his son succeeded him. He then resigned. Stockport Corporation and the constructor resorted to the courts over financial issues including the Corporation unilaterally terminating the contract and proceeding with construction on its own. That aside, the project required the employment and housing locally of over 700 navvies, and transporting them from Hayfield to the construction site on the special railway. The project took over nine years to complete. The locals initially greeted the project with consternation; there was an enormous upheaval to village life, but it eventually succeeded due to its consulting engineers, and its highly competent and dedicated managerial and labour workforce.[1]