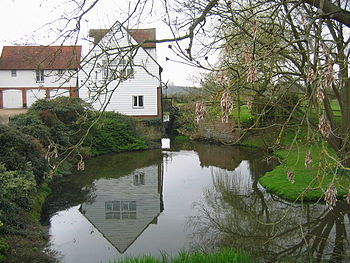 The Eden at Chiddinstone Mill

The River Eden in western Kent is a tributary of the River Medway. It flows through the Weald of Kent from the border with Surrey.

The Eden has its source in Titsey parish, Surrey (TQ160420160551, just north of Clacket Lane motorway services on the M25 motorway and flowing eastward through the Wealden clay to join the River Medway near Penshurst, Kent, (TQ160537160434). The section from its source to where the Gibbs Brook joins it is also known as the Broadmead Water.[1] Its name is a back formation deriving from Edenbridge, the main town through which it flows, and which was originally called in the Old English language "Eadhelmsbrigge" ("Eadhelm's Bridge"). 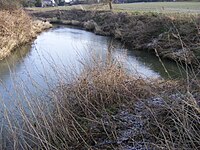 The mouth of the Eden at the River Medway

According to the Environmental Change Network, water quality in the Eden is mainly classified as General Quality Assessment (GQA) Class C, although the headwaters near Oxted are Class D. The river receives treated sewage effluent from two Southern Water Services Limited Sewage Treatment Works (STW), serving Edenbridge and Oxted respectively; the stretches receiving these effluents are both subject to EC Urban Water Treatment "Sensitive Waters" investigations. There are other much smaller private sewage treatment works throughout the catchment. The river and its tributaries support coarse fisheries. Average flows at Penshurst range from 3.909 m³/s in January to 0.485 m³/s in July. Water to fill Bough Beech Reservoir is pumped from a point just upstream of Penshurst.

The River Eden powered a number of watermills. From source to the Medway they were: 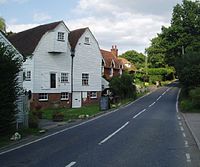 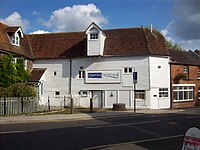 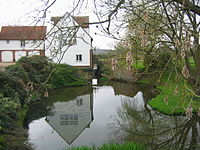 Its main tributaries are the Gibbs Brook, Eden Vale Stream, and the Eden Brook, which has the Felbridge Water as a tributary. The Kent Brook, which forms the boundary between Surrey and Kent for part of its length, joins near Edenbridge.