From Wikishire
Jump to: navigation, search
Not to be confused with many rivers named 'Colne' 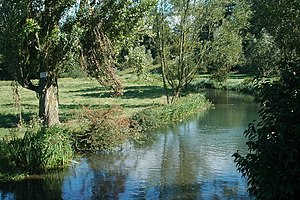 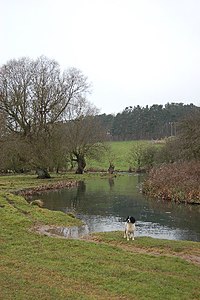 The Coln between Bibury and Coln St Aldwyn

The River Coln is a river in Gloucestershire.

The Coln rises at Brockhampton to the east of Cheltenham, and flows in a south/south-easterly direction through the Cotswold Hills by way of Andoversford, Withington, Fossbridge, Bibury, Coln St Aldwyns and Fairford.

It joins the River Thames to the south-west of Lechlade, where it shares a confluence with the Thames and Severn Canal, by The Round House Footbridge.[1]

Extensive gravel pits that are now redundant, lying between Fairford and Lechlade, form the eastern component of the Cotswold Water Park, which is fed and drained by the Coln.[2]

The river contains fish of many species, including brown trout and grayling.[1]