Fairford is a small town in Gloucestershire, in the Cotswolds on the River Coln, about 6 miles east of Cirencester, 4 miles west of Lechlade and 9 miles north of Swindon. Nearby are RAF Fairford and the Cotswold Water Park.

Every year RAF Fairford hosts the world's largest military air show – the Royal International Air Tattoo. The event brings a boost to economy of the town and surrounding areas.

In March 2003 "Flowers to Fairford" was held as a protest against the use of USAF Fairford as the base for the 14 B-52 bombers aircraft which were used to bomb Iraq. Several thousand people attended and there was a large police presence, but the event passed off peacefully and without incident.[1] 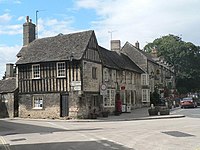 The Ernest Cook Trust has its headquarters in Fairford Park, which also hosts the annual Fairford Steam Rally and Show. This is attended by many hundreds of enthusiasts .

In July 2007 Fairford suffered unseasonably high rainfall which led to major flooding of 64 homes on Milton Street and London Street as well as in some other surrounding areas. This meant that many of the annual events had to be cancelled.

The parish church of St Mary is renowned for its complete set of mediæval stained glass, stone carvings and misericords. Built in the early 1490s, the church[2] is an example of late Perpendicular Gothic architecture that is characterised by slim stone window mullions and light but strong buttresses. The style enabled larger windows than previously, allowing much more light into the building. Grade 1 listed by English Heritage, St. Mary's is of national historical and architectural importance because it houses the most complete set of mediæval stained glass windows in the country, attributed to Barnard Flower, and its structure and details remains unaltered since originally built.[3]

The churchyard includes a stone memorial to Tiddles, the church cat who fell off the church roof. There is also a stone grotesque to commemorate a young boy who climbed up the walls of the church and jumped, falling to his death.

'The Secret Diary of Sarah Thomas, 1860 - 1865', is a published journal by a Victorian diarist living in Fairford. It features many local landmarks.