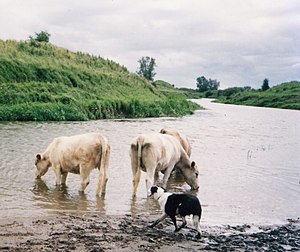 The River Brosna is a river 49 miles long flowing through the counties of Westmeath and Offaly, and which ultimately becomes a tributary of the River Shannon.

The name of the river is from the Irish language, in which it is known as An Bhrosnach. This possibly means "place of twigs".[1]

The river rises in Lough Owel north of Mullingar[2] and enters the River Shannon at Shannon Harbour.

The Brosna begins as a small river, flowing from Lough Owel in a south-south-westerly direction through Mullingar, into Lough Ennell. From Lough Ennell, the Brosna flows into Kilbeggan, where it still powers the mill at Kilbeggan Distillery.

Below Kilbeggan, the Brosna continues flowing south-west through Clara, Ballycumber and Pullough. East of Ferbane, the Brosna is joined by the Silver River. From Ferbane it heads to Shannon Harbour, north of Banagher, where it loses its waters in the Shannon.

The river Brosna is popular for fly fishing and has stocks of brown trout as well as some salmon and grilse.[3] However it has, in recent years, suffered somewhat from pollution problems due to its poor assimilative capacity and the discharge of untreated sewage in the Mullingar area during storm conditions. There have also been discharges of pollutants, whether accidental or otherwise, such as one filmed at the bridge of Clonmore industrial estate in Mullingar.[4][5]

Works, to the cost of £750,000 were undertaken on the river in the late 1940s and early 1950s to improve drainage in the river’s catchment area. As part of the Arterial Drainage Scheme, designed to tackle poor drainage caused by Ireland’s relatively low-lying topography, the river was deepened and widened, leaving the river with the high banks distinctive of many of the rivers in the Irish midlands that received this treatment. More recently, in late 2008 the river was diverted from the N52 road beside Mullingar in order to accommodate a new roundabout and bridge.[6]