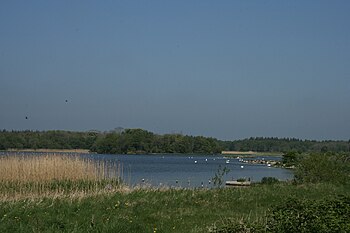 Lough Ennell is a lake near the town of Mullingar in Westmeath. It is situated beside the N52 road, off the Mullingar/Kilbeggan road.[1] It is approximately four-and-a-half miles long by two miles wide wide, with an area of about 3,540 acres. It has a huge area of shallow water with nearly two-thirds of its area being less than 25 feet and almost half of it being under 10 ft deep. Lough Ennell produced Ireland's largest ever lake brown trout at 26 lbs.[2] Lough Ennell is dotted with islands, many of which have now become attached to the shoreline as the levels of the lake have changed.[3] The main river flowing into Lough Ennell is the River Brosna, which enters on the Mullingar side of the lake and exits on the opposite side at Lilliput. Lilliput and Lilliput House were frequently used by Jonathan Swift as a holiday home and place to write, local tradition states that Jonathan Swift was in a boat on the lake when he looked back at Lilliput and noticed how small the people looked at that distance, hence the inspiration for his most famous book Gulliver's Travels. Lilliput at the time was called "Nure" however after the publication of Gulliver's Travels locals began to refer to the lakeshore as Lilliput, the name stuck and today the area is known as Lilliput.

O'Donovan's Ordnance Survey Letters trace the beginnings of the name Lough Ennell, or as it is known in Irish Loch Ainninn. According to tradition the present day Lough Ennell and Lough Owel derive their names from two brothers, Ainninn and Vair who lived at the lakes. They were sons of the Kings of the Fir Bolg, and it was at their respective lakes that Ainninn and Uair died giving the lakes their names. Over the years the name became anglicised to Lough Inill. In maps the name became Lough Ennell, Lough Enyn or Lough Enyll. When the Rochforts took the title as Lords of Belvedere they tried to change the name Lough Ennell to Lake Belvedere.[3]

The loughside has a caravan and camping park, boat hire facilities, hotels and restaurants and a fishery. Belvedere House is also an attraction and is managed by the County Council, it hosts a number of sporting and cultural events annually such as concerts and triathlons.

Lough Ennell fishery is part of the Shannon Regional Fisheries Board's Midland Fisheries Group of managed waters. Brown trout and pike are the main catches.[2] In recent times it appears that stocks of both game and course fish in the lake have been declining, there is speculation locally as to the reason for this.