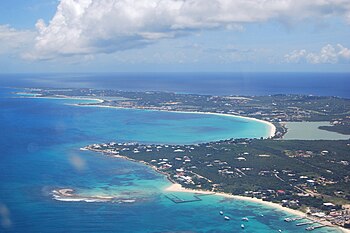 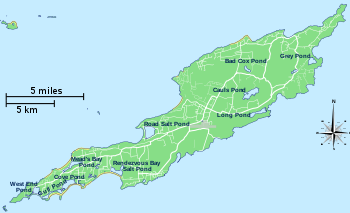 Rendezvous Bay Pond, also known as Rendezvous Bay Salt Pond, is a shallow, 59 acre brackish lagoon near the south-western end of the main island of Anguilla.

The lagoon is an important wetland habitat and denoted as one of the territory's 'Important Bird Areas'.

The pond is on a substrate of marl, on the northern side and sand on the southern. It receives fresh water from rainfall, runoff and a few springs. The pond also receives salt water seepage from the bay through the strip of beach that divides them. It was historically used for salt production.

Vegetation around the pond is sparse, except for stands of buttonwood mangroves (Conocarpus erectus) at its western end. Land at the eastern end is mainly used for grazing livestock.[1]

The lagoon was identified as an 'Important Bird Area' by BirdLife International because it supports a small breeding colony of least terns as well as populations of common terns and brown pelicans.[1]