Redbridge is a suburban town of Essex entirely contiguous with the towns around it in particular Gants Hill to the east and Ilford to the south. Wanstead lies to the west beyond the Roding Valley and the North Circular Road. The A12 Eastern Avenue, a major thoroughfare, runs through joining Wanstead and Gants Hill with Redbridge barely distinguishable between them.

The name of the place comes from a bridge over the River Roding which was demolished in 1921. The bridge was made of red brick, while other bridges in the area had been built of white stone. The bridge was earlier known as Hocklee's Bridge.[1] 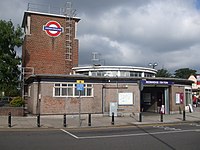 The nearest London Underground station is Redbridge station on the Central Line, which has the distinction of being the shallowest deep-level station, at 26 feet below the ground.

This Essex article is a stub: help to improve Wikishire by building it up.
Retrieved from "https://wikishire.co.uk/w/index.php?title=Redbridge,_Essex&oldid=36931"
Categories: