Reay is a village which has grown around Sandside Bay on the north coast of Caithness. It is within the historic Parish of Reay.

The village is close by the Sutherland border, on the A836 north coast road some 12 miles west of the town of Thurso and 3 miles west of Dounreay.

Along with Thurso the village grew dramatically in the mid-20th century with the development of the experimental nuclear power facility at Dounreay, where technologies such as fast breeder reactors were developed.

The last force-fire in Reay occurred about 1830.

The origin of the name is uncertain. Most of the place names along the coast of Caithness are from the Old Norse language and possible origins from Norse include Ra (a boundary marker) or Vra (a nook or corner). Another possibility is the word Ra, a now obsolete word for the yardarm of a boat. Interestingly, a prehistoric mound at the west end of the beach is called Cnocstanger, which means pole hill. The name may instead be Gaelic, a language which was certainly spoken this far up the coast, perhaps from Reidh (a flat place) or Ratha (a fort or enclosure).

The area around the village has been occupied for millennia. Within the modern village are the remains of a stone circle, several Viking houses and burials, the site of a Bronze Age settlement and a mound which contains the layered remains of several simple Atlantic roundhouses. The church in Reay, which is still in use, was built in 1739 to a highly unusual T-plan, and is now a category A listed building.

The village contains the remains of a far earlier church, dating from the 16th century but on an ancient dedication to St Colman, along with its small, walled graveyard. The existent remains of this old church include a 9th-century cross slab.

Although there are none actually within the village, the Parish of Reay contains the remains of several brochs.

In 1437, the MacKays defeated the men of Caithness at Sandside Bay in the battle known as the Sandside Chase, turning there on the pursuers that had chased them away from an attempted raid.

The parish of Reay was historically a cross-border parish, partly in Caithness and partly in Sutherland. The civil parish was adjusted in 1891 to split off the Sutherland parts.[1]

Sandside House on the edge of the village is a mansion house with extensive grounds dating from 1751. [2] It was previously owned by Thomas Pilkington, who founded Reay Village Golf Club. [3]

The parish includes the hamlets of Fresgoe, Islaud and Shebster, which are close to the boundary between Caithness and neighbouring Sutherland. It adjoins Sutherland to the west and the parishes of Thurso to the east and the Halkirk to the south. The Dounreay nuclear power station is within the parish.

Sandside Bay is a Site of Special Scientific Interest. It is recognised by surfers as being home to a powerful high quality left-hand reef break. This, however, is extremely fickle, and requires very particular wind, swell, and tide conditions to come into shape. The break is also notorious for being very rocky, shallow, and dangerous, such is the irregular form of the reef upon which the wave breaks. 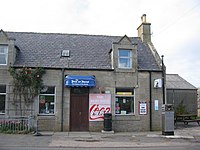 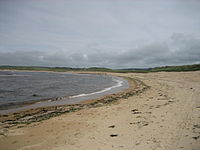 An environmental issue caused by the Dounreay Nuclear Power Development Establishment is that of radioactive nuclear fuel particles that have on occasion been released from the site into the sea, and are now on the seabed near the plant and in Sandside Bay. Some of these are being washed ashore, including a small number on the privately owned Sandside Bay beach which is open to the public and is part of the 10,000-acre Sandside Estate. The Secretary of State for Environment, Food and Rural Affairs committed to clean up and open oversight of the work on 25 October 2006. [1] The Dounreay Particles Advisory Group recommended that the particle monitoring frequency of the beach should be increased to fortnightly. [2]. The 13th Laird of Sandside the Duke of Portland took the Government to Court to assert his ownership down to the low watermark of the estate granted by a barony of 1628 and won. The 19th Laird of Sandside since 1991, Geoffrey Minter, following the radioactive contamination beginning in 1997, took the Government owned UKAEA to court in 2003 and won a judicial review in the Court of Session proving radioactive damage to the estate's land and the UKAEA to be in breach of its statutory duty under the Nuclear Installations Act. UKAEA's contractors now regularly monitor the beach due to a permanent agreement with the landowner.