Ramsden Crays is a parish in the Barnstable Hundred of Essex. It lies north of Basildon and west of Wickford. The parish includes the village of Crays Hill and is located north of the A127 road. The River Crouch runs through the parish. The 2011 census records that there were 862 males and 976 females living in the parish[1]

The place-name 'Ramsden' is first attested in the Domesday Book of 1086, where it appears as Ramesdana. The name means 'wild garlic dene or valley' (cf. the plant ramsons), or possibly 'ram's valley'. Close Rolls show that Ramsden Crays was held by Simon de Craye in 1252, Craye referring to Cray or Craye in France.[2]

The 15th-century church of St Mary's has been converted to a private house. The entire church, excluding the bell tower and the broach spine was entirely rebuilt in 1871. Few elements of the original 15th-century church do remain. It is a Grade-II* listed building.[5] In 1617, Thomas Bartlet described St Mary's Church:

"Parish Church of St Mary stands near the middle of the parish. The church has been entirely re-built in modern times, but incorporates some old work. In the S. wall of the chancel is a window with two 15th-century cinque-foiled heads to the lights and part of the moulded label of the same date. The N. wall of the nave has two windows, both with old splays and rear-arches; the eastern window has also jambs and head of two trefoiled lights with a moulded label, all of c. 1400".[6] 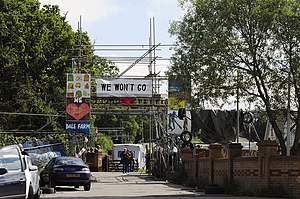 Dale Farm, the largest traveller site in Europe was located in Ramsden Crays. Basildon council had initially given permission for 40 travellers to live on the site in the 1970s. The land was bought in 1996 by an Irish travelling family for £122,000 and after 2001 the population of Gypsy/Irish travellers started to grow, peaking at 675 in 2011[7] Many families started moving to Dale Farm in 2001, leading to legal disputes with Basildon council. In 2005, part of the site was declared illegal by inspectors, however, the traveller community continued to oppose the council's decision, leading to a public enquiry being launched in 2006. This proved unsuccessful as in 2009 Lord Justice Pill ruled that the site was illegal. It was not until March 2011 that Basildon Council voted to go ahead with the eviction of 400 travellers living their illegally.[8] The eviction itself took place on 19 October 2011. Altercations with the police from protesters led to the arrests of 45 people and 15 police officers injured. By the end of the day, the illegal section of the campsite had been cleared[9]