The park spreads across the boundaries of Essex and Middlesex, situated for the most part in the backlands of Stratford and Leyton in Essex but spreading across the River Lea and the Bow Back Rivers towards Bow and Hackney Wick in Middlesex. The Park contains the athletes' Olympic Village and several of the sporting venues including the main Olympic Stadium and London Aquatics Centre, besides the London Olympics Media Centre. The park is overlooked by the ArcelorMittal Orbit, an observation tower and Britain's largest piece of public art.

After the Olympics, the park is to be known as "Queen Elizabeth Olympic Park", to commemorate the Diamond Jubilee of Queen Elizabeth II, also celebrated in 2012.[1] 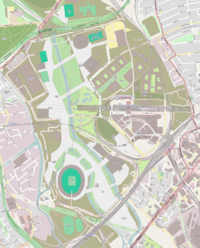 The site of the Olympic Park sits between and adjoins Stratford, Bow, Leyton and Hackney Wick, overlooking the main A12 road. The site was previously a mixture of greenfield and brownfield land, much of it the derelict "rail lands" of Stratford acquired by railway companies amongst their for sidings, junctions and works but including also active commercial areas such as Carpeters Road. The Park also includes parts of Hackney Marshes.[2]

Between the Olympic Park and the original town of Stratford lies the "Stratford City" development, consisting largely of the vast Westfield Shopping Centre and Stratford International Station, both developed with the Olympics and their resulting new residential districts in mind.

The Royal Mail has given the park and the next-door Stratford City development the postcode E20, which previously only appeared as a fictional postcode in the television soap opera EastEnders for its suburb of Walford.[3]

Four railway stations are located in the immediate vicinity of the park:

The sports venues in the park are:

Aerial view of the Olympic Park in April 2012

The park is intended to be put to a number of uses after the end of the Olympics:[4]

On 2 August 2011, it was announced that the five new communities to occupy the site eventually will be named (anti-clockwise from north-east):

All these names have historical backgrounds.[8]

It was announced in March 2012 that the 2015 European Hockey Championships will be held at the Lee Valley Hockey Centre.[10]

Disposal of the Olympic Stadium

The main Olympic Stadium has proven a problem for the Olympic legacy. On 11 February 2011, West Ham United were selected as preferred bidders, ahead of Tottenham Hotspur, to take the stadium over as a football venue after the end of the games. However, five days later Leyton Orient's chairman, Barry Hearn, announced that he would be challenging the decision to allow West Ham to relocate to the stadium, as he believed that having West Ham playing within one mile of their Brisbane Road stadium could cost Orient support and even their existence.[11]

Some years earlier, Leyton Orient had expressed interest in moving Orient to Olympic Park and reducing its capacity to 25,000 seats,[12] while West Ham would cut the capacity to 60,000 if their relocation went ahead.[13]

No firm buyer has been found.