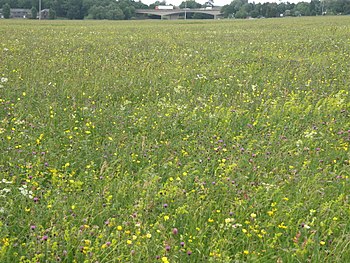 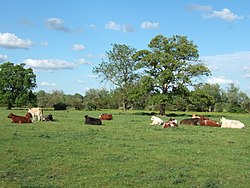 Grazing on the meadow

Portholme is a meadow in Huntingdonshire, spread out between Huntingdon, Godmanchester and Brampton, between two branches of the River Great Ouse. Its original extent was greater, and though the railway line was driven across it in the nineteenth century, slicing one end off the meadow, it remains at 257 acres the largest meadow in Britain.

The meadow is owned by the London Anglers Association, and managed as grazing and enjoyed by the townsfolk of Huntingdon and Godmanchester. Portholme contains many rare species of grass, flowers and dragonfly, it is the only known habitat of the marsh dandelion in Britain.[1] It also acts as a huge natural reservoir for holding excess water in times of flood enabling the river to be run off more slowly, thereby helping to prevent flooding of nearby towns..[2]

From Godmanchester the famous Chinese Bridge crosses one of the channels into which the Great Ouse splts here and by it and a series of smaller footbridges the folk of Godmanchester make their way onto Portholme. From Huntingdon a back lane creeps under the A14 to a footbridge. Brampton, to whose parish the meadow belongs, is cut off from it by the railway line.

When the A14 was built around Huntingdon, it must have been very tempting for the planners to fill Portholme with concrete to drive the new road over, but thankfully they were prevailed upon to keep off and its viaduct sweeps across the river just beyond the nose of the great meadow.

Portholme is a very flat meadow in the midst of the river, and often floods in winter; in days when the climate was colder this produced a huge ice-rink and games of bandy were played here; bandy was invented not far away on Holme Fen.

The sporting possibilities of a huge, flat meadow were not limited to wintertime in the past; the meadow became a racetrack every August, attracting the fashionable set and the less exalted for Huntingdon’s top event of the year, until the Huntingdon Race Course was created outside Brampton.

In 1910, Blériot crossed the English Channel in an aeroplane, and aviation gripped the nation. In the same eyear, on 19 April, James Radley made a flight from Portholme in the imaginatively named "Aeroplane 1", and began the meadow's role as a place for pioneering aviation, in days when there were few dedicated aerodromes and a large, flat meadow was the idea place to take off and land. When Radley formed an aero-manufacturing company in Huntingdon it was named "Portholme Aerodrome Limited".

During the First World War, the Royal Flying Corps trained here and it became, from 1918, RAF Portholme, open unti the 1920s, after which time aircraft largely left Portholme. 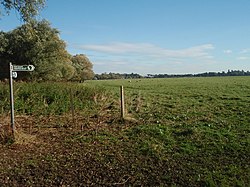