Pinxton is a village and parish in eastern Derbyshire, on the border with Nottinghamshire. It is situated just south of the Pinxton Interchange at Junction 28 of the M1 motorway where the A38 road meets the M1. At the time of the 2011 Census, Pinxton had a population of 5,699.[1] Brookhill Hall and Farm are situated in that part of the parish that extends into Nottinghamshire.

In Anglo-Saxon times, Pinxton was a small agricultural community, thought to have been recorded in the Domesday Book of 1086 as "Esnotrewic." It is also thought that it was known as "Snodeswic," given by Wulfric Spott to Burton Abbey. In Norman times, along with a number of other manors, it was under the control of William Peveril, for whom it was held by Drogo fitz Pons. It is thought that he renamed the manor "Ponceston" and it gradually changed to Penekeston and then to Pinxton.

Since 1800 BC, coal had been extracted in the area. In 1794 the Cromford Canal encouraged this trade. By the beginning of the next century there were a number of deep coal mines. Trade increased with the growth of the industrial revolution. There were also four lime kilns and a china works producing quality ware. Pinxton's prosperity increased further as the terminus, in 1819, of the Mansfield and Pinxton Railway opened.

From the profits of his colliery at Pinxton, D'Ewes Coke (1747-1811) of Brookhill Hall, a clergyman colliery master, founded a local school and an educational charity.

Coal is no longer mined at Pinxton. The collieries and coking ovens have been replaced by an industrial estate, and the old colliery village has all but disappeared.

In Pinxton today, there remains the John King mining Wheel, It was used in the days when mining was available. Now the John King wheel is a historical model for the public to see. The horse gin, or whim from Pinxton Green Colliery has been re-erected at Nottingham Industrial Museum[2] Pinxton Signal box, which once controlled access to Bentinck Colliery has been relocated to Barrow Hill Engine Shed. 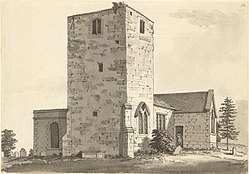 The church in 1733 as drawn by Samuel Hieronymus Grimm

The church of St Helen dates from mediæval times, possibly built on the site of a previous small castle. Much of it was rebuilt in 1790 reusing the original materials, and only the west tower and west end of the old church remains. By 1890, it was so dilapidated that most of the services were held in the mission room. In following century it was repaired and a new porch and north aisle were added in 1939.