Pett is a village in Sussex, founfd five miles north-east of Hastings on the edge of Pett Level, the one-time marshes stretching along the coast of Rye Bay.

The road through the village leads down to the second village in the parish: Pett Level, the coastal part of which is known as Cliff End. Here there is a beach and, as the name suggests, the Wealden sandstone cliffs reach their easternmost point. Pett Level marks the end of both the Royal Military Canal and the western end of the 1940s sea defence wall.[1] The Saxon Shore Way passes through Pett Level.

Pett parish church is dedicated to St Mary and St Peter;[2] there is also a Methodist chapel, and a small Church of England church at Cliff End.[3] 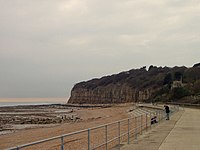 The manor of Pett belonged to a succession of families, including the Halle family, the Levett family, the Fletchers and the Medleys, before eventually passing to the Earls of Liverpool.[4]

There is a Site of Special Scientific Interest partly within the parish. Hastings Cliffs to Pett Beach runs along the coast and is of both biological and geological interest. The cliffs hold many fossils and have many habitats, including ancient woodland and shingle beaches.[5]