Not to be confused with Piel Island 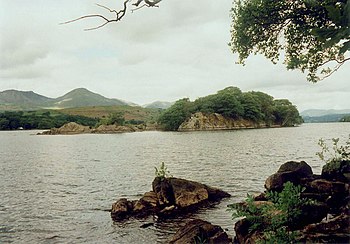 Peel Island is one of the three islands of Coniston Water, the long ribbon lake in the midst of the Furness Fells of Lancashire North of the Sands. The two others are Fir Island (which is connected to the shore unless the water is particularly high) and Oak Island.[1] It is most famous for being the inspiration for Arthur Ransome's 'Wild Cat Island' in the Swallows and Amazons series.

Today the island is a popular tourist destination,[1] and belongs to the National Trust.[2] 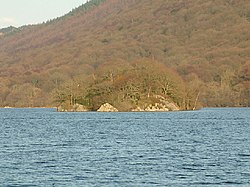 Peel Island on the lake

Peel Island has belonged to the National Trust since it was given to them by John Montagu-Douglas-Scott, 7th Duke of Buccleuch, along with 11 acres of woodland, in 1932.[4]

Peel Island is considered to be one of the origins of the fictional Wild Cat Island in the 1930 book Swallows and Amazons and its sequels, by Arthur Ransome.[1] Ransome was a frequent visitor to Coniston from his childhood and picnicked on Peel Island at the age of eight, where he met W G Collingwood. Collingwood's family remained lifelong friends and his grandchildren become the models for the Walker family (the Swallows) of the books.[5]

Taqui Altounyan, the eldest of the 'Walker' children, described Peel Island in her semi-biographical novel In Aleppo Once as "like a green tuffet, sitting in the water, the trees covering the rocks".[6][7]

The island also features in W. G. Collingwood's own novel, Thorstein of the Mere, A Saga of the Northmen in Lakeland.

In 1967, Donald Campbell died near Peel Island while trying to set a world water speed record with a speed in excess of 300 mph.[8]