Palmerstown village is near the Liffey Valley Shopping Centre. The area is situated near the major junction of the M50 motorway and the N4. It lies approximately four miles west of O'Connell Street in Dublin city centre. The Old Lucan Road, once the main route from the city to the west, passes through the centre of Palmerstown village.

Between 1185 and 1188, Ailred the Palmer and his wife (a 'palmer' being a mediæval term for a pilgrim) took religious vows and founded a priory and monastic hospital of Crutched Friars outside the West Gate of Dublin, on the road to Kilmainham, which they endowed with all their property.[1] In 1188 Pope Clement III confirmed the priory's grants, including the both the parish of Palmerstown west of Kilmainham and another parish named Palmerstown, in the north of the county.[1] Gerard Lee notes an association of palmers with leper hospitals, of which there was one dedicated to St Laurence in the townland of the same name in Palmerstown.[2][3]

The spelling "Palmerston" rather than "Palmerstown" was fixed by the Ordnance Survey of Ireland in the 1830s; this remains the recognised, legal spelling. Locals however generally use "Palmerstown". Road signs have used both. (In 2009 a plebiscite to change the official name to "Palmerstown" was narrowly defeated.[4]

The title Viscount Palmerston created in 1722 in the Peerage of Ireland derives from the place;[5] its spelling also varied,[6] but the form "Lord Palmerston" is now usual for the Victorian prime minister.[7]

The main building of Stewartscare and HSE from Mill Lane 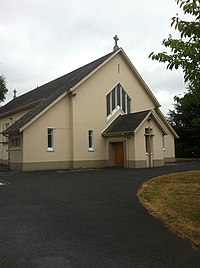 The church in Palmerstown village

The townlands of Palmerstown Upper and Palmerstown Lower straddle the old Lucan Road which was the ancient western highway. Many of Palmerstown's local amenities are located in a cluster along the road. Robin Villas and Hollyville were labourers' cottages built at the beginning of the last century. The old national school is now a community centre. Stewarts Hospital, (formerly the residence of the Hely-Hutchinson family, the Roman Catholic Church of St. Philomena, the National School, the Palmerstown House Pub and Restaurant and a variety of general enterprises, including a bank and convenience stores are located here. Stewartscare is a health care facility at the Stewarts buildings and grounds which overlook the meandering Liffey valley. The Stewarts complex houses the administration of the Irish Health Service Executive. Stewarts Sports and Leisure centre is open to the general public. It also hosts an annual summer camp. 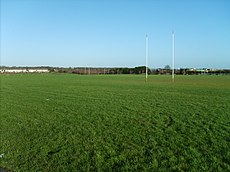 Redcow Farm was the location of the first modern housing development in Palmerstown, constructed between 1955 and 1965. Centred on Manor road, this area contains several shops, the local credit union and a doctor's surgery.

To the east of Redcow Farm, adjacent to the California Hills Park. The name 'California Hill' was given, by the children of the area, to a small wasteland in Ballyfermot to the East of Glenaulin Park, which had been a builder's dump during the construction of the main Palmerstown Estate in the mid to late 60's. The wasteland had a series of small hills which were in fact mounds of builders rubble which had been buried under clay and eventually over grown with wild grass. The children of the area sometimes shortened the name to 'The Caliers' and this name is also still in use today. The hills or mounds were flattened some years ago and the area landscaped for communal/public use.

Mill Lane leads to the original Palmerstown settlement and centre of industry, which once employed over 600 millhands, craftsmen, and labourers. This seventeenth-century low-lying waterside industrial village was complete with flax, seed, oil, and flour mills. The ruin of a pre-Norman church and the remains of the once prosperous thriving community are situated near the river. A small ferry crossed the Liffey here, to where the Wren's Nest pub was situated on the North side.

Palmerstown's largest housing estate was built in the early 1990s in the south east of the area. Adjacent to the Coldcut and Kennelsfort roads and the M50 motorway, the estate marks the 'border' between Palmerstown with Ballyfermot and Clondalkin.

The townland of Woodfarm Acres was mostly farmland, with a few council cottages previously existed on the site. This housing development was built during the 1970s. The estate is bounded by the M50 motorway and N4. Adjacent to Woodfarm Acres is another shopping centre. The Silver Granite Pub is located nearby, as is Pobalscoil Isolde, a secondary-level community school which opened in the 1980s.

The Oakcourt housing estate lies in the western part of the 59-acre Johnstown townland, behind Pobalscoil Iosolde. It was originally developed in the 1970s, and expanded in the mid-1990s. The Johnstown townland extends due west from the Georgian Johnstown House (now St. John's College) on Le Fanu Rd. It runs west to Kennelsfort Road and lies between St. Laurence townland (the St. Laurence House is now the West County Hotel) from the River Liffey and Chapelizod in the north, to Ballyfermot Upper/Blackditch on the south.