Ozleworth is a village in Gloucestershire, approximately 19 miles south of Gloucester. It lies in the Cotswolds.

Ozleworth lies within the Cotswolds, a range of hills designated an 'Area of Outstanding Natural Beauty'. It is approximately 19 miles south of Gloucester and 20 miles southwest of Cirencester.

Newark Park is a National Trust property which was once a Tudor hunting lodge built by the Poyntz family. 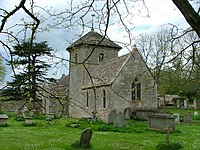 The parish church is St Nicholas of Myra, a Norman church known to have been in existence in 1131. It has a cruciform structure, with one bell.[3] It has an unusual hexagonal tower located in the centre of the church between the nave and the chancel.[4][5] The current nave and font were added in the early 13th century.[4] Archaeological evidence suggests that there was no nave before this time and that the tower originally formed part of the western wall of the church.[6]

The churchyard is circular.

No longer active, the church is looked after by the Churches Conservation Trust.