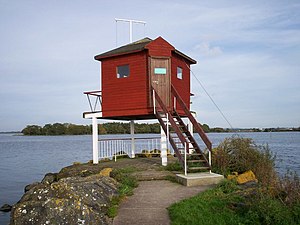 Oxford Island is a small peninsula jutting into Lough Neagh, on the southern shores of the lough in County Armagh, close to Lurgan. It was an island in the lough until 1846.

The island has been designated a National Nature Reserve and public recreation site. The site covers 282 acres and is owned and maintained by the local council.

Much of the area is designated as a National Nature Reserve due to its wide variety of natural habitats. The purpose of all work on the island is to maintain biodiversity and to provide a recreation area for everyone.

In 1846 the water level in Lough Neagh was lowered artificially for the first time, and Oxford Island became a peninsula. Under the Craigavon New City Plans, Oxford Island was acquired as a site for public recreation. At that time most of the land was cultivated or grazed so that any natural vegetation cover was eradicated. Since the acquisition by the council in the late 1960s, many thousands of mixed woodland trees have been planted, the Lough shore allowed to develop naturally and the meadows have largely reverted to species rich grassland.

In order to maintain biodiversity the site is carefully managed. Some of the grassland areas are cut for hay, while others are left for grazing by rare breeds including the Irish Moiled and Dexter cattle. Ongoing efforts to remove alien invasive species such as Himalayan Balsam which can threaten to take over from other native species including removing scrub from part of the shore line to enable the reed beds to flourish.

Oxford Island contains a wealth of both rare and common wild plants. These include

The following butterflies reside at the reserve:

About 60 species of moth have also been recorded.

Lough Neagh is famous for its fish. Some species include:

Lough Neagh attracts many species of bird and is designated as a Special Protection Area. It is especially noted for large numbers of wintering wildfowl which migrate from areas such as Iceland, Scandinavia and Siberia. These birds include:

The following are some species of bird that arrive in the area during summer months:

Lough Neagh is famous for the Chironomidae (Chironomid midge fly). This small insect lives for most of its life in the water feeding on dead plant material. After about a year it rises to the surface where it changes into a pupa which then becomes the adult fly. Billions of flies perform a mating dance, swarming above the treetops around the Lough. The adult flies live for only a few days and are completely harmless as they have no mouth parts. The Chironomid is an important food source for many of the other species of animals.