Over Bridge, also known as Telford's Bridge, is a single span stone arch bridge spanning the canalised West Channel of the River Severn near Gloucester. It links Over to Alney Island.

Although there was a crossing at Over recorded in the Domesday Book,[1] this famous bridge was built by Thomas Telford between 1825 and 1828, to carry traffic east-west. It was opened in 1830 and remained in use for traffic until 1974.[2] Until the Severn Bridge was built in the 1960s, this was the lowest point downstream that the Severn could be crossed by road bridge.

The arch spans 150 feet, and was based on Jean-Rodolphe Perronet's 1774 design for a bridge over the River Seine at Neuilly-sur-Seine. It combines both an elliptical profile over most of the soffit with a segmental profile at its faces. This feature is known as a corne de vache.

Wooden centring used during its construction

When built, the arch sank by 2 inches when its timber centering was removed, and another 8 inches due to settlement of the arch foundations. 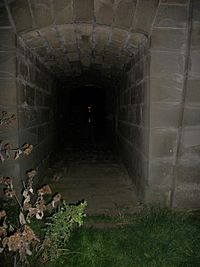 Today, Over Bridge is a pedestrian-only bridge. It is in the guardianship of English Heritage and is a Scheduled Ancient Monument[3] Road traffic on the A40 crosses the Severn on a new bridge alongside and upstream of it.

This is still the last road bridge over the Severn before the Severn Crossings far downstream, and the lowest toll-free crossing (albeit that pedestrians and cyclists pay no toll on the lower bridges either).

The Over Bridge can be seen on the train travelling from Gloucester on way to Lydney or Chepstow.