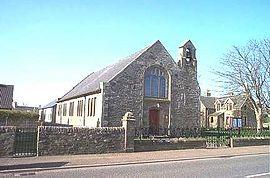 Olrig is a parish in Caithness, along the north coast of the county. The main village in the parish is Castletown. The farmstead bearing the name, Olrig Mains, is a mile southwest of Castletown.

Until 19th century agricultural improvements, the parish was sub-divided into ten townlands or 'fermlands'. Boundaries were mostly disregarded and lost during the 19th century but many townland names remain identifiable in farmstead names ending with 'Mains'.

Various legends and folk tales are associated with the parish. Versions of these tales appear in James Traill Calder's History of Caithness 1887 (pages 55 to 61, as republished 1973 by Stansfield. Two of the best known feature the hillock and well of Sysa figure in both; according to Calder, the well dried up as a result of 19th century agricultural improvements, but the hillock is still there, on the south side of Olrig Hill (ND169647).

In the days when Caithness was ruled as a part of the Norwegian earldom of Orkney, Earl Sigurd the Stout sailed to Ireland, where he sought to become High King of Ireland in place of Brian Boru. Sigurd's bid had been invited by Sigtrygg Silkbeard, the Norse King of Dublin. The armies of the Norse and the Irish met at Clontarf near Dublin on Good Friday in 1014. Both Brian and Earl Sigurd died in the battle, but Sigtrygg survived and prospered.

On the same day, a Norse poet called Daraddus or Dorrad had a vision, an apparition of the Valkyries, twelve in all, on horseback at Sysa. They seemed to ride into the hillock. Daraddus himself approached the hillock and found an opening in its side. Inside he saw the Valkyries were weaving a cloth, and singing as they sang. Daraddus recorded what he heard and saw:

Blood rains from cloudy web on the broad loom of slaughter. The web of man, grey as armour, is now woven. The Valkyries will cross it with a crimson weft

The warp is made of human entrails. Human heads are used as weights. The heddle rods are blood-wet spears. The shafts are iron-bound, and arrows are the shuttles. With swords we shall weave this web of battle.

The Valkyries go weaving with drawn swords, Hild and Hjorthrimul, Sangrid and Svipul. Spears will shatter. Shields will splinter. Swords will gnaw like wolves through armour.

Let us now wind the web of war which the young King once waged. Let us advance and wade through the ranks, where friends of ours are exchanging blows.

Let us now wind the web of war and then follow the king to battle. Gunn and Gondul can see there the blood-splattered shields that guarded the King.

Let us now wind the web of war where the warrior’s banners are forging forward. Let his life not be taken. Only the Valkyries can choose the slain.

Lands will be ruled by new people who once inhabited outlying headlands. We pronounce a great King destined to die. Now an Earl is felled by spears.

The men of Ireland will suffer a grief that will never grow old in the minds of men. The web is now woven and the battlefield reddened. The news of disaster will spread through lands.

It is horrible now to look around, as blood-red cloud darkens the sky. The heavens are stained with the blood of men, as the Valkyries sing their song. We sang well victory songs for the young king. Hail to our singing! Let him who listens to our Valkyrie song learn it well and tell it to others. Let us ride our horses hard on bare backs, with swords unsheathed, away from here.

When the bloody cloth was woven the Valkyries tore it into twelve pieces. Each took a piece and remounted her horse. Then the twelve rode furiously away, six to the north and six to the south.

The piper of Windy Ha

At Sysa, one sunny tranquil day in the leafy month of June, a cowboy called Peter Water stopped to drink and linger at the well, while on his way home to Windy Ha. He rested and slept till near sunset, when he was awakened by a touch on his shoulder. A young lady was beside him, dressed in green, her eyes blue and her hair in golden ringlets. Peter was bashful and felt himself blushing.

"I have come to make a man of you" the lady said. Peter mistook her meaning and demurred. She laughed and continued with her offer: "I will put you in the way of rising in the world and making your fortune" she said, and she asked Peter to choose between a book and a pipe.

Both were magical. In the book Peter saw the status and fortunes of a popular preacher. In the pipe he saw those of a popular musician. He was attracted by both but, though he had never fingered a pipe before, the pipe is what he chose. He found he could play the pipe immediately, and play it well. One condition was attached to the lady's gift: that he swear by the well to return in moonlight on the same evening seven years hence. Peter promised that if alive he would do so.

Peter was soon a popular and prosperous musician, growing in fame and fortune throughout the next seven years. Then he was true to his word and returned to the well of Sysa. Peter has never been seen since, but still his pipe is sometimes heard in Olrig.

(The skeptical attribute the sound to the wind playing though the radio masts on top of the hill, which shows that they lack the imagination required to live in these acres.)