Old Trafford is the oldest Test venue after The Oval and hosted the first Ashes Test in England in July 1884. The venue has hosted the Cricket World Cup five times (1975, 1979, 1983, 1999 and 2019). Old Trafford holds the record for both most World Cup matches hosted (17) and most semi-finals hosted (5).[1][2] In 1956, the first 10-wicket haul in a single innings was achieved by England bowler Jim Laker who achieved bowling figures of 19 wickets for 90 runs—a bowling record which is unmatched in Test and first-class cricket. In the 1993 Ashes Test at Old Trafford, leg-spinner Shane Warne bowled Mike Gatting with the "Ball of the Century".

Despite its rich cricket history,[3][4][5] the venue was perceived as dilapidated and lost test status in 2009. Extensive redevelopment of the ground to increase capacity and modernise facilities commenced soon after in an effort to safeguard international cricket at the venue. The development entailed the restoration of the pavilion and creation of The Point, a £12 million stand overlooking the pitch.[6] The pitch at Old Trafford has historically been the quickest in England, but will take spin later in the game.[7]

The ground is occasionally used as a venue for large-scale concerts, with a maximum capacity of 50,000.

The site was first used as a cricket ground in 1857, when the Manchester Cricket Club moved onto the meadows of the de Trafford estate. Despite the construction of a large pavilion (for the amateurs—the professionals used a shed at the opposite end of the ground), Old Trafford's first years were rocky: accessible only along a footpath from the railway station, the ground was situated out in the country, and games only attracted small crowds. It was not until the Roses match of 1875 that significant numbers attended a game. When W. G. Grace brought Gloucestershire in 1878, Old Trafford saw 28,000 spectators over three days, and this provoked improvements to access and facilities.[8]

In 1884, Old Trafford became the second English ground, after The Oval, to stage Test cricket: with the first day being lost to rain, England drew with Australia.[9] Expansion of the ground followed over the next decade, with the decision being taken to construct a new pavilion in 1894.

In 1902, the Australian Victor Trumper hit a hundred before lunch on the first day;[10] Australia went on to win the Test by 3 runs—the third-closest Test result in history.

Crowds fell through the early 20th century, and the ground was closed during the First World War; however, in the conflict's aftermath, crowd numbers reached new heights. Investment followed throughout the inter-war period, and during this time, Lancashire experienced their most successful run to date, gaining four championship titles in five years.

During the Second World War, Old Trafford was used as a transit camp for troops returning from Dunkirk, and as a supply depot. In December 1940, the ground was hit by bombs, damaging or destroying several stands. Despite this damage—and the failure of an appeal to raise funds for repairs—cricket resumed promptly after the war, with German PoWs being paid a small wage to prepare the ground. The 'Victory Test' between England and Australia of August 1945 proved to be extremely popular, with 76,463 seeing it over three days.

After the Second World War

In 1956 Jim Laker became the first person to take all 10 wickets in a Test match innings, achieving figures of 10 for 53 in the fourth Test against Australia (the only other bowler to take all 10 wickets in an innings is Anil Kumble of India in 1999). Having also taken 9 for 37 in the first innings, Laker ended the match with record figures of 19 for 90, which remain unmatched to this day.[11][12]

On 1 May 1963 the first ever one day cricket match took place at Old Trafford, as the Gillette Cup was launched. Lancashire beat Leicestershire in a preliminary knock-out game, as 16th and 17th finishers in the Championship the previous year, to decide who would fill the 16th spot in the One Day competition.[13]

In 1969 the first Indoor Cricket Centre was opened.

Following Lancashire's reign as One Day champions in the 1970s, a programme of renovation and replacement was initiated in 1981. This changed the face of the ground to the extent that, now, only the Pavilion “is recognisable to a visitor who last watched or played a game in, say, the early 1980s”.[14]

In 1981 Ian Botham hit 118, including six sixes (the second greatest number in an Ashes innings), which he has called "one of the three innings I would like to tell my grandchildren about".[15] England went on to win the Ashes after being lampooned in the national media for such poor performances.

In 1990, Sachin Tendulkar scored his first Test hundred at the age of 17—becoming the second-youngest centurion—to help India draw.[16] In 1993, Shane Warne bowled the "Ball of the Century" to Mike Gatting at the ground.[17] In the same game, Graham Gooch was out handling the ball for 133—only the sixth out of nine times this has ever happened.[18] In 1995, Dominic Cork took a hat-trick for England against the West Indies. In 2000, both Mike Atherton and Alec Stewart played their hundredth Tests, against the West Indies.[19] In the Third Test of the 2005 Ashes series the match ended in a nailbiting draw, with 10,000 fans shut out of the ground on the final day as tickets were sold out. England went on to win the series regaining the Ashes for the first time since 1986/87.[20]

The cricket ground is near the Old Trafford football stadium (a five-minute walk away down Warwick Road and Sir Matt Busby Way), approximately two miles south west of Manchester city centre. Its capacity is 22,000 for Test matches, for which temporary stands are erected, and 15,000 for other matches. Since 1884, it has hosted 74 Tests: the third-highest number in England, behind Lord's and The Oval.[21]

The two ends of the ground are the James Anderson End[22] to the north and the Brian Statham End to the south, renamed in honour of the former Lancashire and England player. A section of Warwick Road to the east is also called Brian Statham Way. Immediately abutting the ground to the south-east is the Old Trafford tram stop.

Old Trafford has a reputation for unpredictable weather. Old Trafford is the only ground in England where a Test match has been abandoned without a ball being bowled—and this has happened here twice in 1890 and 1938, though before five-day test matches were introduced. Before Cardiff hosted its first Test match in July 2009, Old Trafford was reputedly the wettest Test ground in the country;[23] Manchester is situated to the west of the Pennines and faces prevailing winds and weather fronts from the Atlantic.

These prevailing conditions have encouraged Lancashire to keep the ground as well-drained as possible, most recently through the acquisition of a Hover Cover in 2007, and the installation of new drains towards the end of the 2008 season.

In the second Test of 1938 in a desperate effort to ensure play after heavy rain the groundstaff moved the turf from the practice pitch to the square—a unique attempt.[24] In 2010–11 the wickets were relaid, changing their extremely unusual east-west axis to a more conventional north-south layout. The Brian Statham End to the east, and Stretford End to the west, were replaced by the Pavilion End to the north, and the Brian Statham End to the south.

The three-tiered Victorian members' pavilion was built in 1895 for £10,000. It was hit by a bomb in 1940, which destroyed the members' dining room and groundsman's quarters. Most of the pavilion was rebuilt after the War. One million pounds was spent on a new roof after it began to leak in 2003, and was renovated ten years later, so that players can be housed in the new 'Media and Players' stand, leaving the pavilion solely for the use of members.

The Pavilion's position was noteworthy in that, until 2010, it sat parallel to the wickets, rather than behind them, presenting the members with one of the worst viewing angles possible. It contains batting and bowling Honours Boards, unveiled during the 2004 Test match.[25] The pavilion underwent redevelopment at the start of 2012 and was reopened for the YB40 game against Scotland. 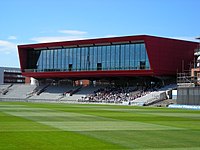 The Point, Old Trafford's distinctive £12 million conference centre, and at 1,000 seats one of the largest multi-purpose conference facilities in Lancashire,[26] opened in 2010.[27] 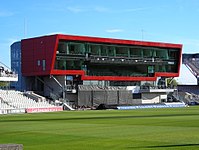 The Media and Players Centre which opened in September 2012

Old Trafford was unusual in that there were two media stands at opposite ends of the ground prior to the new Media Centre which opened in September 2012. Television and radio commentators previously operated in temporary television studios and commentary boxes at the Stretford End which were perched on hospitality boxes.

The idea of an indoor school was born in 1951, when nets were strung up in the Members' Dining Room in the pavilion. A permanent facility was built in 1969, and replaced in 1997. The current building stands to the north-west of the pitch; it contains five 60-metre lanes on various surfaces, several conference rooms, and a large shop.[28]

To the north-east of the ground, immediately adjacent to the Pavilion is a 150-bed Hilton Garden hotel which opened in late 2017. Similar in architecture to The Point on the other side of the Pavilion, half the rooms have a balcony with a full view of the pitch.[29] Previously, this was occupied by the Old Trafford Lodge which opened in 1999. The hotel had 68 rooms, 36 having unobstructed views of the playing surface. It was demolished in 2016 and the new hotel opened in late 2017.

Following rejection of plans, in 2003, to sell Old Trafford, and move the club to a new purpose-built stadium in East Manchester, the focus was switched to upgrading the current ground. Lancashire CCC, with a coalition of businesses, are in the process of making the cricket ground the centre of an anticipated 750,000 square-foot development, in a mixed-use scheme involving business, residential, retail, hotel and leisure facilities.

The first phase of redevelopment saw the laying of new drains in Autumn 2008. In 2009, the Stretford end of the ground was closed to facilitate destruction of the County Suite, Tyldesley Suite, 'K' and 'L' Stands and the scoreboard; The Point, overshadowing new seating to the west of the pavilion, opened in June 2010.[27] During the 2010/11 winter the wickets were turned from their previous east-west axis to a more typical north-south alignment,[30] which prevents the low evening sun from interfering with matches, and increased the number of available wickets by five, to sixteen. Many of Lancashire's home games for the 2011 season were transferred to out grounds while the new wickets 'bedded in'.