North Wingfield is a large village in northern Derbyshire, located approximately 4½ miles south-east of Chesterfield, and 1 mile north-east of Clay Cross. The A6175 road from the M1 motorway to the A61 road runs through the village. 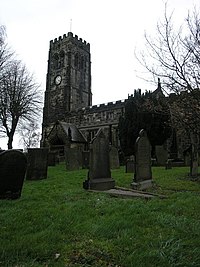 During the Domesday Book survey in 1086, the manor of North Wingfield was known as Winnefelt. It was noted that there was a church and a priest. Parts of the current church, dedicated to St. Lawrence, date from the Norman era, with some features being Anglo-Saxon in origin.

The manor of North Wingfield during the Domesday surveys was in the possession of Walter De Ayncourt. The name eventually became shortened to Deincourt, which was used by the village's secondary school, Deincourt Community School from 1953 until it closed in 2010.

The village now only has an infant, a junior school following the closure of Deincourt Community School.

Located in the former coalfields, the village was served by several collieries for most of its recent history. Now, partly due to its location near to the M1 motorway and its three schools, the village has experienced an influx of residents in recent years, with many housing developments having taken place.