Flag of the North Riding of Yorkshire 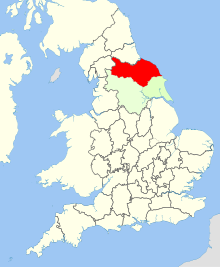 North Riding of Yorkshire within England

The North Riding Flag was unfurled on May 4th 2013 at the Strathmore Arms, Holwick by the competition's organiser Andy Strangeway and the Deputy Lord-Lieutenant of North Yorkshire, Peter Scrope. The unfurling was also attended by the Vice-Chairman of Durham Council, the Vice Chairman of North Yorkshire Council and the Mayor of Stockton-on-Tees Council.

The Rt Hon The Lord Mayor of City of York sent the following message of suport: ‘I am delighted to send greetings from the City of York on the occasion of the unfurling of the new North Riding Flag. I hope many in the region will look with pride upon this new emblem for the North Riding area. Very best wishes to all involved in the creation and unfurling of the flag’.

The Mayor of Redcar and Cleveland, Cllr Denise Bunn, sent the following message of support: “My sincere apologies that I am unable to attend on Saturday for the North Riding Flag Unfurling. My very best wishes to you and everybody concerned on what I’m sure will be a lovely day and a special occasion at Holwick.”

The flag was created by Jason Saber and chosen in a popular vote organised by adventurer and campaigner Andy Strangeway, in cooperation with the Flag Institute. The motivation behind the competition and creation of the flag was to reaffirm the existence of the North Riding of Yorkshire as an entity in its own right and a traditional constituent part of the wider county following decades of ever changing administrative arrangements which had threatened recognition of this ancient division of the county of York.

The yellow edged blue cross recalls the pattern of the arms borne by the North Riding Council from 1928-1974 and the colours of the arms (yellow stars on a blue background) attributed to local saint, Wilfrid an important figure in the region’s early history. The cross is set against a green field and in combination the three colours allude to the North Riding’s natural features; the green representing the large tracts of the famed North York Moors National Park, while the blue and yellow reflect the North Sea coastline and such rivers as the Swale, Tees and Esk. The white rose, associated with the county of York for about six hundred years, which had also featured on the coat of arms of the former North Riding Council, completed the arrangement.

The Pantone Colours for the flag are:-