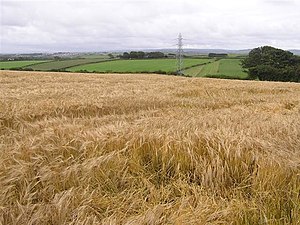 A field by Bellemont in the Liberties 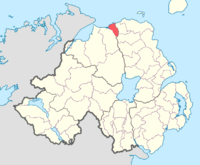 Location of the Liberties

The North East Liberties of Coleraine are those parts of County Londonderry which lie to the east of the River Bann, and they constitute a barony of that county. They are the lands across the Bann which were governed as appurtenant to Coleraine, a town which stands mainly on the river's west bank.

The River Bann is bridged at Coleraine and the town has spread over the bridge into its liberties. Beyond this townscape, the Liberties are largely rural and empty apart from the seaside resort of Portstewart. They are bounded to the west by the tidal River Bann and beyond it Coleraine and the Barony of Coleraine, while to the east in County Antrim are Dunluce Lower (north-east) and Dunluce Upper (south-east).

The Liberties of Coleraine formed the north-western part of the mediæval territory known as the Route. Until the Plantation of Ulster under King James I, the River Bann formed the western border of County Antrim all the way to the sea, and the land to the west was 'County Coleraine'.

In 1613, the King incorporated The Society of the Governor and Assistants, London, of the New Plantation in Ulster, within the Realm of Ireland, which was commonly called 'the Irish Society': a consortium of livery companies of the City of London established to colonise the county which became County Londonderry. The Society received the towns of Derry (henceforth Londonderry) and Coleraine, but the investors insisted that they should have control of the mouth of the towns' respective rivers: the Foyle at Londonderry and the Bann at Coleraine. Hence the Liberties delimited east of the Bann and placed under the authority of the Society as part of the Liberties of Coleraine.

The parishes in the North East Liberties of Coleraine are:[1]