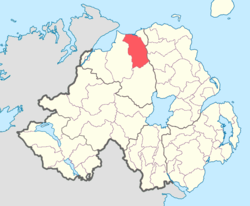 Location of the Coleraine barony

The Barony of Coleraine, which is named after Coleraine town, is a barony in County Londonderry. It stretches from Coleraine and the county’s coast, inland along the west side of the River Bann. It is bordered by five other baronies: Keenaght to the west, Loughinsholin to the south, the North East Liberties of Coleraine, Dunluce Upper, and the Kilconway to the east. Before the creation of the barony there was in this area a territory known as "Firnacreeve".[1]

The largest settlement in the barony is Coleraine itself, which town also crosses the Bann into the North East Liberties of Coleraine.

Before its creation, the barony of Coleraine was a region known as Firnacreeve, or simply "the Creeve", a territory ruled at an early date by the Airgiallan people of Fir na Craoibhe (“Men of the tree/branch”).[2] At some point another Airgillian people known as the Fir Li (claimed to be descended from Colla Uais) came to dominance in the region between the River Moyola and the Camus (south of Coleraine), covering over half the territory of Firnacreeve.[2] The Fir Li would eventually fall under the domination of the Cenél nEóghain by the 9th century, with many being driven east across the River Bann.[2]

The Cenél mBinnigh and later Clan Conchobhair, both of the Cenél nEóghain migrated to the Creeve.[2] By the beginning of the 12th century the Ó Catháin (O'Kane), a sept of the Cenél nEóghain, had risen to dominance over the territories of Keenaght and the Creeve by subjegating the Ó Conchobhair (O'Connor) of the Cianachta Glenn Geimin (Cianactha of Glengiven) and the Fir na Craoibhe.

Along with the territory of Barony of Tirkeeran, Keenaght and Firnacreeve would form the basis of Tircahan or Cathanaght both signifying "O'Cahans Country"[3] and later County Coleraine, from which was formed County Londonderry.

References to Firnacreeve in the Annals

From Fir na Craoibhe to Coleraine

When the baronies of Ulster were being created around 1585, the general manner was to name it after the principal town or castle lying within the area, in which they held their court, baron, and gaol. As a result, the new area took the name “Coleraine”, not that old name of Firnacreeve, just as the barony created out of Kinel-Ferady was renamed “Clogher”.[1]

The civil parishes in the barony of Coleraine are: