Newstead is a former coal-mining village, originally called Newstead Colliery Village, in Nottinghamshire, and to be found between the city of Nottingham and the towns of Kirkby-in-Ashfield, Sutton-in-Ashfield and Hucknall. The parish is part of Nottinghamshire's 'Hidden Valleys', a scenic area in the middle of the county largely designated for marketing purposes but still of distinctive interest. The village had a population of 1,312 at the 2011 census.

Lord Byron, the poet, lived at nearby Newstead Abbey.

Thee is a railway station here, Newstead station, on the 'Robin Hood Line', which runs from Nottingham to Worksop.

The colliery village was built at Newstead in the late-19th century for miners at Newstead and Annesley Collieries.[1] Newstead Colliery operated between 1874 and 1987.

The former mining location has now been redeveloped into a nature reserve and business park. Hazelford Way Industrial Estate is home to several large companies including Bunches Florapost; Badgemaster; and Leivers and Millership. 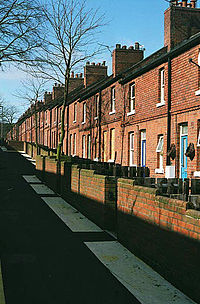