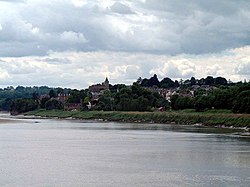 Newnham on Severn from the riverside

Newnham on Severn is a village in western Gloucestershire. It lies in the Royal Forest of Dean, on the west bank of the River Severn, approximately 10 miles south-west of Gloucester and three miles south-east of Cinderford. It is on the A48 road between Gloucester and Chepstow, Monmouthshire.

A parish church was established in the 14th century (although there had been a chapel of ease since 1018), and in 1366 a new church building was built on the high ground of the village as the old one faced erosion from the river. The new building has itself been damaged by a gunpowder explosion in 1644 during the English Civil War and a fire in 1881, but is still in use.

Because of Newnham's location on the Severn, the Ancient Romans built three roads through the location, where they forded the river. The Anglo-Saxons established a permanent settlement, the Normans built a motte-and-bailey fortification for defence, and in mediæval times it became a major port with links around Great Britain and Ireland. In 1171, Henry II staged an invasion of Ireland from Newnham. One account claimed that he set sail with 400 ships and 5,000 men, which suggests its importance as a port. For a time Newnham was the most successful Gloucestershire town west of the Severn. Its role as a port and trading hub declined, however, rapidly with the 1827 opening of the Gloucester and Sharpness Canal.

In 1810, an early attempt at a Severn tunnel began construction just south of Newnham. Work was abandoned after flooding in 1812.

The scenic Gloucester to Newport railway line goes through the tunnel here. Newnham railway station opened in 1851 and closed in 1964. 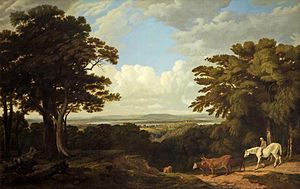 Newnham-on-Severn from Dean Hill by William Turner of Oxford acquired for Gloucester City Museum & Art Gallery in 1977 with help from The Art Fund.