Newcastle West is a town in western County Limerick. It is the largest town in the county, excluding the city of Limerick, and sits on the River Arra which flows into the River Deel. Newcastle West is in the middle of a great bowl-shaped valley in West Limerick, known one time as the valley of the Wild Boar, apparently due to the abundance of this animal here when the area was thickly wooded. The crest of the town carries the image of a wild boar. Newcastle West is on the N21 road from Limerick to Tralee, between Rathkeale and Abbeyfeale.

Newcastle West grew up around a castle, the ruins of which are located off the town square. The large castle ruins are well maintained.

The castle was built by the FitzGerald family who arrived at some point after 1194, by 1298 the castle had been completed in stone. The town then came to be known as Newcastle, West Limerick, but over time the 'west' became part of Newcastle and the town was known by the current name Newcastle West.

According to Begley,[2] the parish was called Newcastle and Ardagh in 1704. Newcastle was joined with Monagea from 1722 until 1764 when it became a separate parish. Lewis stated that parts of Monagea and Killeedy were in the parish of Newcastle West.

Two notable mentions included in the history of the diocese of Limerick were the first Monsignor in the diocese, Richard Baptist O'Brien in 1881, and Denis Hallinan who was P.P. here and later became Bishop.

Sir William Courtenay, the local landlord, held 10,500 acres of land in Newcastle West in the late 16th century. He was a staunch Catholic, and suffered persecution for his beliefs. His son George may have practised his faith in secret. Their home was reputed to have had a room in which priests were hidden. William Courtenay was denounced in the House of Commons as a papist recusant in 1624.

During the reign of Elizabeth I, three battles were fought near here. Tradition has it that the locals killed many of the Knights Templar. The town was sacked in 1302 and destroyed in 1315. Two of the Earls of Desmond died here. Garrett (better known as Gearóid Iarla) in 1399, and James, the 8th earl, in 1462.

Markets were held on Tuesday, Thursday, and Saturday. Large numbers used to attend Thursday's hiring fairs for farm workers. Fairs were held on April 1, May 3, July 12, August 20, October 1, and December 10.

The motto that goes with the town coat of arms is "As Dúchas Dóchas", which may be translated as 'Our Hope springs from our Traditions'. The town now has a population of around 11,000. The urban area has passed well beyond the old town boundaries which are due for redefinition.

The West Limerick and Newcastle West area has traditionally had a strong Dairy and Agricultural contribution to the local economy. Huge changes occurred during the latter years of the 20th and early 21st centuries seeing the expanding of the town as a services centre for West Limerick, also bringing an increase in population. Many people who work in Limerick City live in Newcastle West and its environs and commute the 26 miles daily. However, Newcastle West itself is now a large centre of employment with a strong business and entrepreneurial culture. Large to medium employers include Pallas Foods, Rettig Myson, Ballygowan Spring Water and Filtertek. There are dozens of Businesses employing 10-50 including PSE Power Systems, Brian A Flynn, Brian Scully Services and Nolan Products. Hundreds are employed in the retail stores including local and international multiples. In recent times, there has been national success stories in e-business from local companies like HuntOffice.ie[3] and IrishTourism.com,[4] who are growing information technology skills and employment in the emerging knowledge economy of the town.

Newcastle West has numerous supermarkets, including Dooley's SuperValu, a Tesco, an Aldi and a Lidl. The town is also well known for its clothes shopping with numerous fashion boutiques stocking designer labels, including Ela Maria, Kimono, Bella Sola, The G Boutique, and Platform.[5] 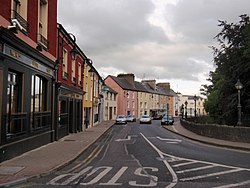 A Street by the River

The town was connected to the railway network until 1975, as part of the "North Kerry" line, from Limerick city to Tralee, via Rathkeale and Listowel. In 1999, the station house was restored. Newcastle West railway station opened on 1 January 1857, closed for passenger traffic on 4 February 1963, closed for goods traffic on 2 December 1974 and finally closed altogether on 3 November 1975.[6]

Today, Newcastle West is situated on the Irish National primary road N21, where it is joined by the R520, R521 and R522 regional roads. It is forty minutes' drive from Limerick City and an hour from Killarney. It is within an hour's drive of Shannon, and Kerry International Airports, and two hours from Cork Airport. 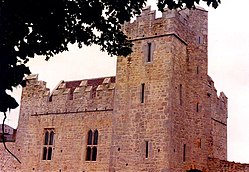 The Great Southern Trail is a 53-mile stretch of countryside in West Limerick/North Kerry. It is the route taken by the former Limerick-Tralee railway line, which opened in 1867/1880 and closed in 1975/1977. The Great Southern Trail Action Group are a non-profit group working to develop the Limerick to Tralee section as a rail trail so that everyone can explore this beautiful region in a safe, leisurely way by foot or bicycle. This Group is based around the Newcastle West area.[8]