Newbiggin-by-the-Sea is a small town in Northumberland, on the North Sea coast. Once an important port for shipping grain and a coal mining town, it has declined to be a small fishing port making use of traditional coble boats.

The town's name is apparently Middle English in which Niw bigging means "new building";[1] this may refer to an extension of the early settlement and parish of Woodhorn.

A local tale is that the village was once named 'South Wallerick', based on a mediæval record, though this in fact refers not to "South Wallerick" but to 'Sanctum Walericium', or St Waleric;[2] the name of the church, though to be at Alnmouth, which was at one time called Newbiggin.

The church was for centuries from its early construction a chapel only, with a tower surmounted by a spire which was originally used as a beacon.[3] In the 14th century, Newbiggin was a very important maritime centre, called upon to support Edward III in his campaigns in Scotland.

During part of the Middle Ages, Newbiggin was a major port for the shipping of grain - it is said that it was third such port only in importance, after London and Kingston upon Hull. Henry III granted a charter for a weekly market to be held in Newbiggin on Monday and an annual fair. Mention occurs of its pier and shipping in various old documents; and in 1337, as a borough of note, it sent bailiffs to a council on matters of state, convened by the Bishop of Lincoln, the Earl of Warwick and other noblemen.[4]

In 1805, two boats, with nineteen men, were lost in a storm off this place after which £1700 was donated by fund-raising in the Newcastle region to relieve the bereaved families. As early as 1828, Newbiggin was a popular beach resort, with facilities to cater for visitors. By this time the small town had five public houses, one of which had a spa-like array of bathing facilities, several shops, and lodging houses[4] with a township of 503 acres.[3] The village featured a shore, which, being a fine smooth beach about a mile in length, was well suited for bathing, for which purpose the place, by 1848, was much frequented during warmer seasons.[3] By this time, several well-built guesthouses took hold. The bay gave good anchorage for small vessels, but even then was very little used, except for the numerous boats belonging to the fishery, in which most of the inhabitants were employed. The plentiful fish caught were herring, cod, ling, haddock, salmon, trout, turbot, halibut, soles, lobsters, and crabs not only for the supply of the neighbouring markets but the region; and buildings for the curing of herrings.[3] 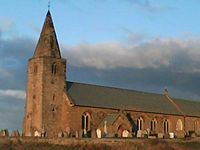 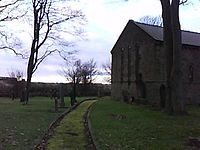 The thirteenth century Parish Church of St Bartholomew, bleakly situated against a North Sea backdrop at Church Point, contains a notable collection of mediæval gravestones. Eight complete cross slab grave covers have been reset in the walls of the north aisle which was rebuilt in 1912. The chancel, the east and western bays of arcades and the west tower are all thirteenth century, while the spire dates to the fourteenth century.[5]

The Church of St Mary the Virgin in Woodhorn (commonly known as Woodhorn Church) is the oldest building in the area, with parts dating back to the 11th century, but has not functioned as a church since 1973. In recent decades, the building has housed at various times a museum and artists' studios. Newbiggin Town Council has set up the Woodhorn Church Working Group to discuss the future use of the now vacant building.[6]

Woodhorn Church was once the mother church in the Parish of Woodhorn with Newbiggin. When she was declared redundant in 1973, that role passed to St Bartholomew's.[7]

Fishing has always been associated with Newbiggin, although later many inhabitants were employed in coal mining. By Victorian times, Newbiggin was Northumberland's favourite seaside town, attracting hundreds of visitors every day in the summer months.[4]

Newbiggin Colliery was sunk in 1908. The colliery closed in 1967, but at its peak in 1940, 1400 men were employed there. The former Newbiggin Colliery Band is now the Jayess Newbiggin Brass Band, named for its president and former member, cornet legend James Shepherd.[8]

Newbiggin-by-the-Sea now has persistently high unemployment and those in work have comparatively low wages.[9]

The town was at the end of the first telegraph cable from Scandinavia in 1868, and was laid from Jutland, Denmark. Attractions in Newbiggin today include the thirteenth century parish church,[5] and the new flagship Newbiggin Maritime Centre, which has replaced the former heritage centre at a cost of £3million.[10]

The Lifeboat Station was opened in 1851 following a fishing disaster in which ten Newbiggin fishermen lost their lives in stormy seas. It is the oldest operational boathouse in the British Isles.[11] Celebrating over 160 years as a lifeboat station, Newbiggin has had 13 different station lifeboats over the years; today it operates an inshore Atlantic 85 lifeboat. The crews have been presented with 16 awards for gallantry.[12]

Now complete is a £10,000,000 renovation to rebuild and improve Newbiggin's rapidly eroding beach. This involved importing 500,000 tonnes of sand from Skegness, delivered by the Trailing Suction Hopper Dredger (TSHD) Oranje[13] and deposited on the beach[14] through a pipe approximately 39.4 inches (1.0 m) in diameter. A new offshore breakwater was installed to accompany the matching breakwater on the opposite side of the bay.[15] Also installed is a brass statue by Sean Henry named Couple, anchored in the centre of the bay.[16][17]

Newbiggin-by-the-Sea boasts the longest promenade in Northumberland.[18] Each spring and autumn, the promenade becomes a prime location for naturalists watching the North Sea seabird migratory passage.[19]

Until 2004 Newbiggin was host to a street fair that attracted thousands of people every year; a huge fair that expanded over many years. In its final years, the fair was set out in the following format: starting at the beginning of the shopping area of Front Street, up to the Cresswell Arms public house flowing into Church Point car park and continuing along the seafront promenade. The lifeboat house and boat yard became the music venue. A stage replaced the boats and the lifeboat house opened its doors, serving food and afternoon tea.

Starting in 2010, the annual Old Ship Music Festival is attempting to bring back a summer event to the village. It invites bands from the region and worldwide to play, as well as local comedians, and raises money for charity with the help of local businesses. In 2010 it raised £700 for Help for Heroes, where in 2011, the chosen charity was The Sir Bobby Robson Foundation, and raised £1,100.[20]