Alnmouth is a small and delightfully pretty seaside village in Northumberland, at the mouth of the River Aln. The village is at the end of a road off the main A1068 road about four miles south-east of Alnwick.

At the mouth of the River Aln, the village was an important trading port, mainly involved in the export of grain and in smuggling. Due to the trade in grain, the village contained a number of granaries. The port declined after the river changed course during a violent storm in 1806. This incident also resulted in the original church on Church Hill being destroyed. The church had already suffered much erosion by the river and was in a state of collapse. After the loss of the grain exports, the old granaries were converted to houses.

Today, Alnmouth is a tourist resort. It is within the 'Northumberland Coast Area of Outstanding Natural Beauty'.

The village has the fourth oldest golf course outside Scotland. The original course was established in 1869; it is believed that it was designed by Mungo Park] who became the club's first professional.[1]

The name Adtwifyrdi or Adtuifyrdi appears in Bede's Ecclesiastical History of the English People. The name means "at the two fords"; it is believed to refer to the confluence of the River Aln at its mouth with a tributary. Here Archbishop Theodore of Tarsus presided over a synod in 684 in the presence of King Ecgfrith of Northumbria, at which Bishop Tunberht of Hexham was deposed and St Cuthbert elected Bishop of Lindisfarne.[2][3]

A monastic settlement stood on Church Hill, which until two hundred years ago was joined to the village across the beach.

According to the Encyclopædia Metropolitana, Alnmouth was taken and fortified by the French during the reign of Queen Elizabeth I.[4][5] The Schooner Hotel was built in the 1600s.

John Wesley is reputed to have visited Alnmouth in 1742 and stayed at the Schooner Hotel, and afterwards said about the village that it was "famous for all kinds of wickedness".

During the American War of Independence, Alnmouth was attacked by the American privateer John Paul Jones. On 23 September 1779, Jones fired a cannonball at the town; it missed the church tower and landed in a field before striking a farmhouse roof.

On Christmas Day 1806, a storm struck and diverted the River Aln was into a new channel cutting Church Hill off from the village. The old channel silted up and sand dunes developed across the old rivermouth.

In 1857 the road from Hipsburn and the Duchess Bridge across the river were built, and at about the same time the flood banks were constructed that prevented the water from inundating much of the estuary flood plain at the times of the highest tides

An exhaustive history of the village was written in 1851 by William Dickson, entitled Four Chapters from the History of Alnmouth.

The village was in 1860 selected as one of fourteen weather stations, and equipped with a barometer by the Duke of Northumberland acting as president of the Royal National Lifeboat Institution.[6] The barometer and a chart of recent readings was kept on public display, to seek to provide fishermen with indications of likely weather patterns so as to assist in diminishing losses at sea. The barometer remains on display, in the window of a cottage facing on the main street, to this day. In November 1876 a new church, St John the Baptist on Northumberland Street, was consecrated by the Bishop of Durham.[7]

View of Alnmouth and the estuary of the River Aln

Alnmouth is served by Alnmouth railway station which is situated in Hipsburn, a mile inland to the west. 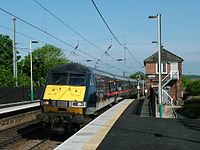