From Wikishire
(Redirected from New Windsor)
Jump to: navigation, search

Windsor is a suburban town in eastern Berkshire. It is best known as the site of Windsor Castle.

The town stands on the south bank of the River Thames, opposite Eton in Buckinghamshire. Windsor and the surrounding areas contain some of the most expensive and desirable housing in the United Kingdom.

The village of Old Windsor, just over two miles to the south, predates what is now called Windsor by around 300 years; in the past Windsor was formally referred to as New Windsor to distinguish the two.[1]

The early history of the site is unknown, although the site was almost certainly settled many years before the mediæval castle was built. Histories of the town note that the combination of the navigable river and the strategically-placed hill point to the likelihood of continuous human settlement from early times. Evidence includes archaeological finds from Windsor, such as palaeolithic hand-axes, neolithic flint picks, Bronze Age swords and an Iron Age brooch. Although Roman remains are few, there is ample evidence of Anglo-Saxon settlement in the area.[2]

Windsor is first mentioned in the Anglo-Saxon Chronicle. The name originates from Old English Windles-ore, or 'winch by the riverside',[3][4] a royal settlement, now called Old Windsor, located about three miles from the modern town. Some time after 1086, probably in the reign of King Henry I, the royal household relocated three miles upstream to the recently built (c.1070) timber motte and bailey castle in the manor of Clewer (noted in the Domesday Book as 'Windsor Castle'). By 1110, important Great Councils of State were noted as taking place at the castle and King Henry married his second wife there in 1121, after the 'White Ship' disaster. The settlement at Old Windsor largely transferred to this 'New' Windsor during the 12th century, although substantial planning and setting out of the new town (including the parish church, marketplace, bridge and leper hospital) did not take place until c. 1170, following the The Anarchy|civil war of Stephen's reign. At about the same time, the present upper ward of the castle was rebuilt in stone. Windsor Bridge is the earliest bridge on the Thames between Staines and Reading, having been built when bridge building was not common. It played an important part in the national road system, linking London with Reading and Winchester, but also by diverting traffic into the new town, underpinned its success. 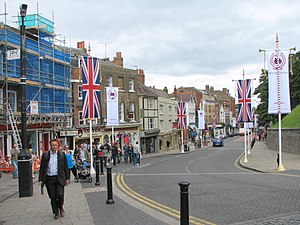 The town of New Windsor, as an ancient demesne of the Crown, was a privileged settlement from the start, apparently having the rights of a 'free borough' for which other towns had to pay substantial fees to the king. It had a merchant guild (known by the fourteenth century as the Fraternity or brotherhood of the Trinity)from the early 13th century and, under royal patronage, was made the chief town of the county by late the same century. Windsor was granted royal borough status by King Edward I's charter of 1277 which gave no new rights or privileges to Windsor but, as one historian puts it, "recognised [Windsor's] existence and gave it a legal status as a borough".[2] Importantly, as a self-governing town, it maintained a 'common cheest' paying for improvements to the town from its own resources. The town accounts of the sixteenth century survive, although the most part of the once substantial borough archive were destroyed, probably in the late seventeenth century.

New Windsor was a nationally significant town in the Middle Ages, certainly one of the fifty wealthiest towns in the country by 1332. Its prosperity came from its close association with the royal household. The repeated investment in the castle brought London merchants (goldsmiths, vintners, spicers and mercers) to the town and provided much employment for townsmen. The development of the castle under Edward III (1350–68), for example, was the largest secular building project in England of the Middle Ages, and many Windsor people worked in the castle on this building project. King Henry III, a hundred years earlier, had spent more on Windsor Castle than on any other royal building project, save the rebuilding of Westminster Abbey. The Black Death in 1348, although reducing some towns' populations by up to 50%, seems to have had less of an impact in Windsor. Possibly 30% of the town's population died, but the building projects of Edward III brought many building workers to the town, possibly doubling the population: the Black Death, and the plagues that followed in 1361 - 72, were a 'boom' time for the local economy. New people came to the town from every part of the country, and from continental Europe, to benefit from royal expenditure at the castle. The poet Geoffrey Chaucer worked at Windsor Castle as 'Clerk of the Works' in 1391.

The development of the castle continued in the 15th century. Windsor became a major pilgrimage destination, particularly for Londoners. Pilgrims came to touch the royal shrine of the murdered Henry VI and the fragment of the True Cross in the new St George's Chapel (1480) and visit the same king's college dedicated in 1440 to the Blessed Virgin Mary at Eton (Eton College). Pilgrims came with substantial sums to spend. There were over 29 inns in Windsor to provide accommodation, some very large. The town became very prosperous. For London pilgrims, Windsor was probably second in importance only to Canterbury and the shrine of Saint Thomas Becket. King Henry VIII was buried in St George's Chapel in 1547, next to the body of Jane Seymour, the mother of his only legitimate son, Edward (Edward VI).

The town began to stagnate about ten years after the Reformation. The castle was considered old fashioned and shrines to the dead thought 'superstitious'. The early modern period formed a stark contrast to the mediæval history of the town. Most accounts of Windsor in the 16th and 17th centuries talk of its poverty, badly made streets and poor housing. Shakespeare's play The Merry Wives of Windsor is set in Windsor and contains many references to parts of the town and the surrounding countryside. Shakespeare must have walked the town's streets, near the castle and river, much as people still do. The play may have been written in the Garter Inn, although this was certainly not part of the modern Harte and Garter Hotel opposite the castle.

Windsor was the home of the New Model Army and the castle was garrisoned by Colonel Venn during the English Civil War. Despite its royal dependence, like many commercial centres, Windsor was a Parliamentarian town. Charles I was buried without ceremony in St George's after his execution at Whitehall in 1649. The present Guildhall, built in 1680, replaced an earlier market hall that had been built on the same site around 1580, as well as the old guildhall, which faced the castle and had been built around 1370. The contraction in the number of public buildings speaks of a town in decline.

In 1778, there was a resumption of the royal presence, with George III at the Queen's Lodge and, from 1804, at the castle. This started a period of new development in Windsor, with the building of two army barracks. However the associated large numbers of soldiers led to a major prostitution problem by 1830 in a town where the number of streets had little changed since 1530. The substantial redevelopment of the castle in the subsequent decade, the coming of two railways in 1849 and Queen Victoria's residence from 1840 signalled the most dramatic changes in the town's history. It was catapulted from a sleepy mediæval has-been to the centre of Empire - many European crowned heads of state came to Windsor to visit the Queen throughout the rest of the 19th century. Excessive redevelopment and 'refurbishment' of Windsor's mediæval fabric at this time resulted in widespread destruction of the old town, including the demolition of the old parish church of St John the Baptist in 1820. The original had been built in 1180.

Most of the current town's streets date from the mid-19th century.[5] However the main street, Peascod Street (pronounced Pes-cod Street) is very ancient. It predates the castle by many years, certainly it formed part of the 10th century parish structure in eastern Berkshire. In comparison, the 1,000-year-old royal castle, although the largest and longest occupied in Europe, is a recent development. "New Windsor" was officially renamed "Windsor" in 1974.

Windsor is particularly well served when it comes to shops. As a tourist town there is a wide selection of gift shops around the castle, together with stylish shops and restaurants in Windsor Royal Station.

Windsor is a popular tourist destination and location of Windsor Castle, one of the official residences of the British Royal Family. The castle was originally established by King William I but has been substantially altered and added to over the centuries.

As a result of the royal residence Windsor has facilities usually found in larger towns: two railway stations, a theatre and several substantial hotels. The town is also the location of Legoland, built on the site of the former Windsor Safari Park. On construction, several tons of hippo dung had to be removed from the enclosure used by the animals.

Regular return riverboat cruises operate daily from February to November from the Promenade, Barry Avenue. These Trips operated by French Brothers, these include forty-minute and two-hour trips and provide unique views of the Castle.

The Royal Windsor Wheel is a more recent addition to the town's tourist attractions, and provides an overhead view of the surrounding area, including the castle, Eton and the Thames Valley. Located in Alexandra Gardens near the River Thames, it is assembled in the summer and dismantled in the autumn.