Netherton Hall is a country mansion which stands in the parish of Farway in eastern Devon, some four miles south-east of Honiton. The present house was built in 1607 in the Jacobean style, restored and rebuilt 1836-44. It is a Grade II listed building.[1]

Netherton Hall in the parish of Farway, Devon (Edmund Prideaux, 1727)

During the Middle Ages, the estate of Netherton was a possession of Canonsleigh Abbey.[2] Following the Dissolution of the Monasteries under King Henryu VIII, it was sold by the crown to Sir Bernard Drake(c. 1537 – 1586) of Ash, Musbury, in Devon, who granted the 'grange' to Mr Loman.

Early in the reign of King James I, Sir Edmund Prideaux bought Netherton.[2] He was a Counsellor at Law and double reader of the Inner Temple (and was created a baronet on 17 July 1622).[3] Sir Edmund Prideaux, newly married to his third wife, Mary Reynell, built a new mansion on the site in 1607, which date is inscribed atop the full-height porch, much of which survives in the present building.

The house was in poor repair when visited in 1795 by the Devon topographer the Rev. John Swete. It was then owned by Sir John Wilmot Prideaux, 7th Baronet (1748–1826). Swete made a watercolour sketch of it (studiously omitting a "modern mean wing which presents its gable-end" which he considered ugly) and recorded in his journal:[4]

This fair house of Netherton which Sir Edmund Prideaux built, though no longer fair, is the place of residence of his lineal successor Sir Wilmot - and with him it bids fair to fall to the ground for the mansion and the family will probably perish together. They both totter and to neither is there a prop of support ... Surrounded by paltry offices and deserted gardens, its mullioned windows block'd up to save a trifling tax, and deprived of the groves that once overhung it, naked and forlorn, little is the consequence which it possesses, and for ever has it ceased to arrest the admiration of the traveller.

Between 1836 and 1844, Sir Edmund Saunderson Prideaux, 9th Baronet (1793–1875), restored and rebuilt the house. He died without surviving male children and the baronetcy became extinct.[5]

Netherton Hall was later the home of Samuel Tuke (1854–1937), born in Hitchin, Hertfordshire and who died at Colwell, Honiton.

In 1919 the estate was purchased by the playwright Harley Granville-Barker (1877–1946), and received visits from many prominent literary figures including Sir George Bernard Shaw, T.E. Lawrence and Thomas Hardy.[6] 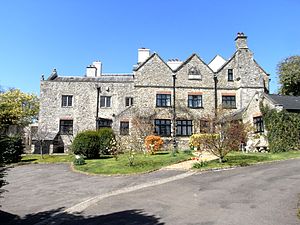 The main part of the house, including 4 bedrooms, 5 reception rooms, 4.35 acres of land with tennis court and swimming pool was sold in 2012 for an asking price of £1.5 million.[8]