The National Railway Museum is a museum in York telling the story of rail transport in Britain and its impact on society. It is part of the British Science Museum Group of National Museums. It is found in the midst of the city, just outside the city walls west of the River Ouse (thus in the West Riding) beside York railway station.

The museum houses the national collection of historically significant railway vehicles, as well as a collection of other artefacts and both written and pictorial records.

The National Railway Museum in York displays a collection of over 100 locomotives and nearly 300 other items of rolling stock, almost all of which either ran on the railways of Great Britain or were built there. Also on the 20-acre site are many hundreds of thousands of other items and records of social, technical, artistic and historical interest, exhibited mostly in three large halls of a former motive power depot next to the East Coast Main Line, near York railway station.

The museum was established on its present site, the former York North locomotive depot, in 1975, when it took over the former British Railways collection located in Clapham, Surrey and the York Railway Museum located off Queen Street, immediately to the south-east of the railway station;[2] since then, the collection has continued to grow.

The museum is a short walk from the railway station in York, either on the road or by a staircase from the rear of the platforms. A "roadtrain" runs from the city centre (near York Minster) to the museum on Leeman Road during half term, holidays and summer. York Park and Ride also serve the museum from the car park entrance, on Line 2 (Rawcliffe Bar-York). Admission to the museum has been free since 2001. It is open daily from 10 am to 6 pm from February to November and 10 am to 5 pm during the winter months.

'Locomotion' – the National Railway Museum in Shildon, County Durham was opened in October 2004 and is operated by the NRM in conjunction with the local council.[3] It houses more of the National Collection in a new building and a historic site around the former workshop of Timothy Hackworth and in the most recent full year for which figures have been published (2011–2012), it attracted more than 210,000 visitors. 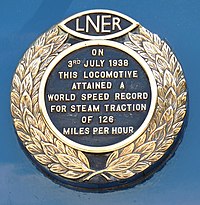 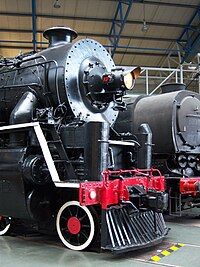 There are approximately 280 rail vehicles in the National Collection, with around 100 being at York at any one time and the remainder divided between 'Locomotion' at Shildon and other museums and heritage railways. The earliest are wagonway vehicles of about 1815. The permanent display includes "Palaces on Wheels", a collection of Royal Train saloons from Queen Victoria's early trains through to those used by Queen Elizabeth II up to the 1970s, among them some of the first rail vehicles to be set aside for preservation.[4][5][6]

Other key exhibits normally to be seen at York include the 1846 Furness Railway No. 3 "Coppernob" locomotive, and the more modern express passenger steam locomotives London and North Eastern Railway Class A3 No. 4472 Flying Scotsman (added to the collection in 2004),[7][8] its streamlined sister Class A4 No. 4468 Mallard and London, Midland and Scottish Railway Princess Coronation Class No. 6229 Duchess of Hamilton.[9] Flying Scotsman is among the exhibits intended for operation on the National Rail network from time to time.

The museum has imported several major vehicles for display: the Chinese Class KF7 4–8–4 locomotive donated in 1981 was built in Britain and the Wagons-Lits sleeping car donated in 1980 had been used on the Paris-London Night Ferry service. The single exception to the rule of exhibits associated with Britain is the Japanese 0 Series Shinkansen leading vehicle which was donated to the museum by the West Japan Railway Company in 2001 and which now forms part of an award-winning display, and is the only Shinkansen vehicle on exhibit outside Japan.

Rail vehicles on display are exchanged from time to time with other organisations, and examples of new-build stock from the current industry sometimes visit the museum for short periods.

The many other two and three-dimensional elements of the collection include signalling equipment, road vehicles, ship models, posters, drawings and other artwork,[10] tickets, nameplates, staff uniforms, clocks, watches, furniture and equipment from railway companies' hotels, refreshment rooms and offices (including company Seal (device)|seals) and a wide range of models, some of which are operated on the museum's O scale model railway (originated in 1982).[11]

The National Railway Museum holds a large open library and archive of railway related material. This includes an internationally significant collection of locomotive and rolling stock engineering drawings from railway works and independent manufacturing companies. Copies of many of these engineering drawings are sold to the heritage railway movement to assist with their new build locomotive and restoration projects. They are also sold to modellers who can use the drawing to produce accurate scale models. The library holds more than 20,000 books[12] and 800 journals of which around 300 are active.[13] The archive also holds a large collection of technical and test records, as well as timetables including a large number of Bradshaw timetables. The archives also hold some 1.75 million photographs covering the earliest era of photography to the modern day.[14] These include official collections from railway companies and collections from enthusiasts like Eric Treacy and H. Gordon Tidey.[15][16][17][18]

In 1999/2000 the Museum began to collect recordings of former railway staff for a National Archive of Railway Oral History. It also holds the archive of steam train recordings by Peter Handford.[19] In 2009 The Forsythe Collection[20] of travel and transport ephemera was acquired for the collection.[21] Many of the museum's artworks and posters can also be viewed through Search Engine although these are now displayed in a series of temporary exhibitions in the museum's new art gallery which opened in 2011.[22]

The 'Search Engine' facility opened in late 2007 and is open from 10:00 to 17:30 Wednesday to Saturday. The archive and library collections can be viewed by anyone without an appointment although the website recommends pre-booking archive materials at least 24 hours in advance. The majority of its collections have been listed on its website for people to view what materials are available prior to their visit. For those people that cannot visit the museum itself there is a research service offered by the museum called Inreach.

Although there had been amateur attempts to establish a national railway museum from the late 19th century, the National Collection today results from the fusion of two long-running official initiatives. One was led by the State museums sector, evidencing pioneering technology, and the other by the railway industry, in which the key contribution came from the North Eastern Railway as successors to the historic Stockton and Darlington Railway.

What became the Science Museum collection was begun in the 1860s by the Patent Office,[23] whose museum included such early relics as Puffing Billy, Stephenson’s Rocket and Agenoria (sister locomotive to Stourbridge Lion), which was outhoused to York at an early date.

Preservation of redundant equipment by the railway companies themselves was a matter of chance. Sometimes relics were stored in company workshops and offices and some were destroyed as circumstances changed. Where put on public display at all the equipment was usually mounted on railway stations in a case or on a plinth. Coppernob at Barrow-in-Furness, Derwent and Locomotion at Darlington and Tiny at Newton Abbot were long-lived examples of this form of display.

Several railway companies maintained their own historical collections over the years. Nationalisation of the railways in 1948 gave the opportunity for a more consolidated approach and a report was produced by the British Transport Commission in 1951.[24] Few of the proposals made at the time came to anything, but a collection at York was one which did.

The Beeching Report, beside its more infamous acts of vandalism, recommended that British Rail should stop running museums. In reaction, a campaign was led by transport historian L T C Rolt and others such as the historian Jack Simmons to create a new museum.[25][26] Eventually agreement was reached under terms in the Transport Act 1968 for British Rail to provide premises to be occupied by a National Railway Museum which would be a branch of the National Museum of Science and Industry and the first national museum outside London or Edinburgh. The closure of the existing rail museum in Clapham, Surrey to move its collection to York was at the time bewailed by Londoners.[27]

The building provided was the former locomotive roundhouse at York North (rebuilt in the 1950s), alongside the East Coast Main Line. In 1973 the old York museum was closed as was that at Clapham (some items in the latter were kept in the south to form the basis of the London Transport Museum in Covent Garden). The York and Clapham collections were supplemented by vehicles brought from storage at Preston Park in Brighton and elsewhere, and restored.

The museum was opened by Prince Philip, Duke of Edinburgh in 1975 on a date to coincide with the 150th anniversary celebrations of the opening of the Stockton & Darlington Railway.

In 1979, the museum commissioned a working replica of Stephenson's Rocket for the following year’s Liverpool and Manchester Railway 150th anniversary.[28] This has since represented the museum at events around the world. Another working replica was added to the collection for the 150th anniversary of establishment of the Great Western Railway in 1985: that of the 7-foot broad gauge locomotive Iron Duke.

In 1990, The Rev. W. Awdry's Railway Series Thomas the Tank Engine books were assured a permanent place in the NRM's collection of historical railway books, due to their role in maintaining children's interests in railways.

After repairs and re-roofing in the 1990s, the museum's main hall was reopened on 16 April 1992 by Prince Edward, Duke of Kent: the new 'Great Hall' was to give enhanced opportunities to display large artefacts such as railway signals, a footbridge from Percy Main Metro station and a segment from the Channel Tunnel.[29] 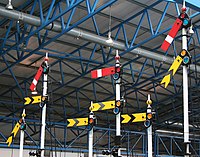 Semaphore signals in the Great Hall

In 1995 the museum joined forces with the University of York to create an academic research base, the Institute of Railway Studies (and Transport History).[30] It has also since partnered with York College to create the Yorkshire Rail Academy to teach vocational skills. The museum has also provided engineering apprenticeships and participates in partnerships aimed at delivering heritage skills training.[31]

In 1996 the Museum Garden was created incorporating a 7' 3" gauge ridable miniature railway. A playground was also added.

In 2008 the Shildon Locomotion Museum ("Locomotion") was opened at Shildon in County Durham.

The Museum's locomotives are many and various. They include:

Steam locomotives located away from York