It is believed to have been built in or around 1795. Today it carries a minor lane out of Whitelaw hamlet towards Duns, but before the bridge west of Chirnside was thown over the Whiteadder Water, the road over Mouth Bridge was the main road from Duns to Berwick – before the Mouth Bridge was built, the route was through the Mouth Ford.

The bridge today is a Category B Listed structure, and one of the few structures thereabouts of such venerable age. 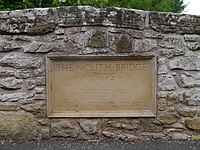 Plaque on the bridge

By the 1970s, the Mouth Bridge had become dilapidated. In 1983 it was declared too dangerous and closed. The council decided to demolish the bridge, but were met with a popular petition that forced a public enquiry, which was mobbed with those protesting the proposed demolition.

The Berwickshire Civic Society led the campaign to have the bridge repaired and reopened, which was duly completed in 1992.