Morville is a little village in Shropshire, just three miles west of Bridgnorth at the junction of the A458 Bridgnorth Road and the B4368, which comes over the hill from Corvedale.

The village is on the Mor Brook (which appears to be named after the village, not the village from the stream), at the foot of a steep slope to the Shropshire Hills.

The font of St Gregory's

The parish church, St Gregory the Great, is one of two serving the parish of Morville with Aston Eyre: Aston Eyre Church has no dedication and is a chapel of ease of St Gregory’s.[1]

The church is set in a totally rural setting, within an enclosed area, in a field and includes a car park and is approached by a driveway. The building was completed in 1118 and retains almost all of the original Norman features and was constructed within the precincts of a Priory establishment. This was destroyed in 1540, leaving the church as the parish place of worship.[2]

As the church stands adjacent to the National Trust's Morville Hall, it attracts numerous visitors. 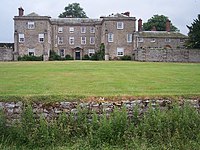 The great house of the village is Morville Hall. The house was originally an Elizabethan stone built country house, dating from 1546. It was enlarged and expanded around 1750 to the Georgian model and so its appearance is of that age, but with Elizabethan features appearing amidst the Georgian classicism.

The house is today onwed by National Trust, (though open by written appointment only).

Just north of the village is Aldenham Park, a 17th century country house and estate in in thirty acres of parkland. The house was built by Sir Edward Acton and his son, Sir Whitmore Acton.