Mochrum is a village in the west of the Machars peninsula in Wigtownshire, and a parish of the Machars also. The parish covers 22,000 acres, and is approximately 10 miles in length and 5 miles broad around the village.

Mochrum village lies 9 miles southwest of Wigtown. The parish was described by its minister in 1838 as "bleak but healthful".[1] A number of farms and scattered cottages, though outside the village, come within Mochrum parish, as does the village of Port William and the clachan of Elrig.[2]

The village consists of a Main Street, a long row of mostly large, terraced cottages dating back to the 1800s, and Mote Brae, a row of eight semi-detached formerly council-owned houses built in the early 1930s. There is evidence of another 'street' running along the line of the back gardens of the current main street houses. This may have been the original main street as the buildings found here show evidence of having been lived in, although now are almost entirely converted into sheds and garages, and are considerably older than the houses of the current Main Street. The oldest house in the village to still be in use is the old gravedigger's cottage adjacent to the kirk gates.

Port William lies 2 miles south of Mochrum village. The port was constructed by Sir William Maxwell, and in the 1800s was a safe anchorage for vessels of about 200 tons. Each coastal farm had its own "port" by clearing the rocks away so that a ship could beach at high tide, unload and reload and float off at the next high tide.

The Kirk and churchyard 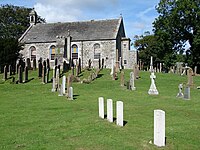 Mochrum Church was built on the site of (and using the walls of) a previous church building which dates back to the 12th century. The former Kirk building was largely destroyed by fire in the 1770s, and the current building which used most of the former building's rectangular walls in its construction, was substantially altered sometime around 1840. The Georgian T-plan kirk building, which dates back to 1794, is a prime example of the Church of Scotland's post-Reformation ecclesiastical architecture.[3] The churchyard contains 10 war graves of which 4 male and 1 female are unknown.

Sir John Dunbar of Mochrum was killed at the Battle of Flodden in 1513. he was survived by his wife Janet Stewart, and his third son Gavin Dunbar (1490-1547), became Archbishop of Glasgow in 1524. A fortified mediæval manor house is located at Castle Island, also called Drumwalt.

Myretoun McCulloch was owned by the McCullochs, and in 1574 they had the 5-merkland of Balsalloch in the "Barony of Myretoun".[4] Myretoun Castle is on the Monreith Estate, on the border of Mochrum and Glasserton parishes. It was owned by Sir William Maxwell, and then the Maxwells built Monreith House. Myrtoun Castle was built on an earlier motte.,[5] but was there also a castle and motte on the island.

Barsalloch Iron Age fort at Mochrum is the site of many prehistoric forts, and many earthworks, standing stones, and crannogs, as well as both early and mediæval crosses. There is another Iron Age hill fort at Doon of May hill fort.[6]

The foundations are all that is left of Chapel Finian, a 10th-11th-century chapel standing on an old raised beach at Corwall Port. It probably takes its name from St Finian who was educated at Whithorn and died c.579. The site was possibly a landing place for Irish pilgrims to St Ninian's shrine. [7] It is shown on Timothy Pont's map in Blaeu's Atlas, as "Chappel finan".[8]

Druchtag Motehill is a steep-sided mound and site of a 12th-century motte-and-bailey castle, lying about 100 yards northwest of Mote Brae.[9] The Old Place of Mochrum was built in 1368.[10]