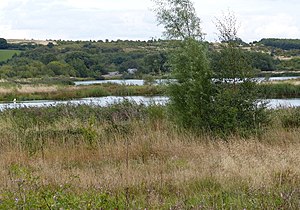 On the Middleton Lakes Reserve

Middleton Lakes RSPB reserve or formally Middleton Hall Lakes is a nature reserve of 395 acres,[1] at Middleton in Warwickshire, although the northern part of the reserve extends into Staffordshire.

The reserve as seen today was created and is run by the Royal Society for the Protection of Birds and was opened in 2011.

Much of the site was, until its acquisition by the RSPB in 2007, a gravel quarry, operated by Hanson Aggregates.[1] The site was formerly referred to, in birding literature, as Fishers Mill- (Warwickshire), Drayton Bassett- (Staffordshire) and Dosthill- (to the East) -Lakes, -Pools, -Pits or -Gravel Pits.

The reserve lies to the rear of Middleton Hall, whose catering and toilet facilities are available to reserve visitors. The River Tame flows northwards through the reserve,[1] some miles downstream from RSPB Sandwell Valley and not far from the West Midland Bird Club's Ladywalk Reserve and Kingsbury Water Park.

The Birmingham and Fazeley Canal cuts through the reserve,[1] west of the river and roughly parallel to it. It separates the flooded and re-modelled former gravel pits to the East from an area of ancient woodland and former agricultural fields. The canal is crossed by Fishers Mill Bridge, on the county border. A public bridleway also runs through the western half of the reserve, roughly east–west, as does a stream, Langley Brook, which rises in Sutton Coldfield and flows into the Tame on the reserve.

To the south of the main pools, is an area of meadowland. A smaller meadow near the visitor carpark is set aside for children's play.

Some pools east of the river (sometimes known as Dosthill North[2]) are also part of the reserve, and a public right of way to them and the nearby village of Dosthill, in Staffordshire, also exists, although the public bridge over the river collapsed and is awaiting replacement.

There are four established walking trails, varying from 500 yards to two miles in length,[3] with three purpose-built viewing platforms and a viewing screen.[3] The RSPB plans to erect a bird hide at the northern end of the reserve,[3] and later to provide a visitor centre.

Vehicular access for visitors is from Bodymoor Heath Lane, alongside Aston Villa's Bodymoor Heath Training Ground, some distance south of the reserve.

The quarry was redeveloped as a reserve in conjunction with Hanson. Islands and spits were created in the former gravel pits. 25 acres hectares of Willow were removed and the edges of pools re-profiled to a gentle slope to provide greater areas of mud and thus appeal to wading birds. The large meadow is grazed by a herd of English Longhorn cattle, ensuring ideal conditions for nesting skylarks and wild flowers.

The area is regionally important for overwintering wildfowl such as common pochard, tufted duck and smew. Other notable bird species include lesser spotted woodpecker, bittern, barn owl,[4] short-eared owl,[5] little egret, marsh harrier[5] and Cetti's warbler.[4] Grey herons breed in a heronry near the play meadow,[4] with up to 100 individuals present.[5]

Even before the establishment of the reserve, the gravel pits were known for their attraction to breeding, passage migrant and vagrant birds.[6] In the latter category, a least sandpiper and a pectoral sandpiper visited for overlapping periods in May 2002.[6] More recently, the reserve has been visited by rarities including glossy ibis, cattle egret, and great white egret.

Otters are also present, as are a total of over 1,000 other animal plant and fungus species.

The RSPB's targets include attracting bearded reedling, northern lapwing, common redshank and common snipe to breed, or to do so in greater numbers.