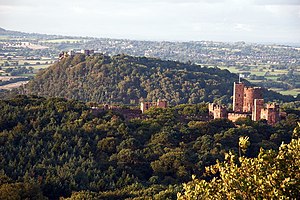 Peckforton ridge out to the Beeston Gap

The Mid Cheshire Ridge is a range of low sandstone hills which stretch north to south through Cheshire. The ridge is discontinuous, with the hills forming two main blocks, north and south of the "Beeston Gap".

The main mass of those to the south are known as the Peckforton Hills. The larger group of hills to the north does not have a collective name. 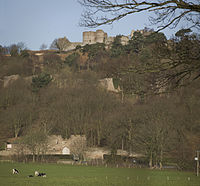 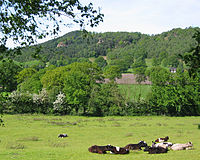 The ridge attains its highest elevation at Raw Head in the Peckforton Hills, some 745 feet above sea level. Other significant summits are, from north to south:

The hills are composed of a range of sandstones of Permian and Triassic age. North–south faulting is in part responsible for elevating harder-wearing strata above the general level of the Cheshire Plain. Typically the higher summits are formed from the Helsby Sandstone.

The ridge acted as something of a barrier to the passage of Irish Sea ice during the last ice age and its hills are etched with numerous glacial meltwater channels, many of which formed subglacially. Particularly spectacular examples are those at Urchin's Kitchen in Primrosehill Woods and at Holbitch Slack near Cotebrook.[1]

A series of Iron Age hill forts adorn the ridge from Woodhouse Hill and Helsby Hill in the north through Eddisbury and Kelsborrow Castle to Maiden Castle in the south.

The ridge is traversed by the popular Sandstone Trail, a middle-distance recreational route originally established by the former council between Beacon Hill and Grindley Brook on the Shropshire border but now extended into Frodsham to the north and Whitchurch to the south. Sections of the Delamere Way, Longster Trail and Eddisbury Way also explore parts of the ridge.

Numerous of the woods along the ridge have been used for orienteering competitions over the years. Horseriding is also popular in the area, as it is traversed by a number of bridleways, byways and green lanes.