From Wikishire
(Redirected from Merse)
Jump to: navigation, search 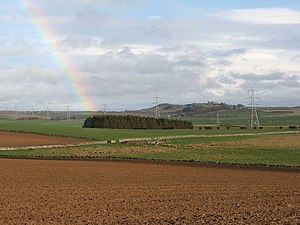 A farm near Gordon, Berwickshire

The Merse is the major agricultural district of Berwickshire, comprising the pastoral lands between the River Tweed to the south and the hill country of Lammermuir to the north and west. The name of the Merse is also used on occasion as a byname for Berwickshire as a whole.[1]

This is the largest and most southerly of the natural districts of the county, the other important districts being Lammermuir and Lauderdale, and it is in the Merse that the main towns of Berwickshire are found. It is a richly fertile land, of crops and well-fed livestock, the land level by the rivers and elsewhere undulating and wooded.

The origin of the name is not settled. A "merse" is a marsh, and it could refer to the marshy land beside the Tweed and its tributaries. It is indeed a word attributed to such landscape elsewhere. Blau's 'Atlas of Scotland' of 1654 however names the district Marcia (a Latinised name for his Latin text) and identified the word as derived from "March"; a borderland, which is from the Old English mearc, and this may then be the origin. Blau notes that the Earldom of March had its lands here.

In 1882-4, Frances Groome's Ordnance Gazetteer of Scotland described the Merse:

Merse, a district on the eastern part of the Scottish Border. In modern territorial arrangement it is the largest and most southerly of the three divisions of Berwickshire, and has been computed to comprise 129,600 acres; in loose popular phraseology it is the whole of Berwickshire, including both the Lammermuir and Lauderdale districts; in proper topographical nomenclature, based on strict reference to geographical feature, it is all the low country between the Lammermuirs and the river Tweed, and includes all the Merse district of Berwickshire, with all the parts of Roxburghshire northward of the Tweed; and in ancient political designation it was the entire champaign country between the Lammermuirs and the Cheviots, included all the lowlands of Teviotdale, and was regarded as having Roxburgh town and castle for its capital.[2]