Menstrie is a village in Clackmannanshire found about 5 miles east of Stirling. The village stands at the foot of the escarpment of the Ochil Hills, and is one of the long string of such villages collectively known as the Hillfoots Villages.

The village is on the A91 road from Stirling to St Andrews.

Menstrie stands on the carse or flood plain of the River Devon. It is roughly astride the Ochil Fault whose movement gave rise to the dramatic southern scarp of the Ochils but which is now quiescent.

Two of the most westerly summits of the Ochil Hills, Dumyat and Myreton Hill, rise steeply to the north of the village to reach about 1,300 feet high. These two hills are divided by Menstrie Glen, from which the small watercourse of Menstrie Burn emerges and runs through the village. Less than a mile the south of Menstrie, the burn joins the River Devon which in turn meets the River Forth at Cambus.

The Menstrie Burn, though generally tranquil, drains a catchment area (Menstrie Glen) of about 5 square miles in the Ochil Hills and occasionally experiences flash floods. On 29 August 2012, the burn overflowed its banks and 38 elderly residents of Menstrie House had to be evacuated to other care homes within the region. No-one was hurt. The Community Centre and some nearby roads and houses were also flooded though no residents needed evacuation. The A91 road was closed for some hours while structural engineers checked the integrity of the bridges over the burn. [1][2] 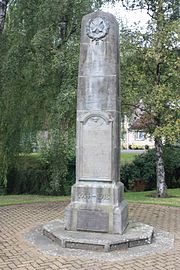 The village has two general stores (one containing the Post Office), a pharmacy, a pub (The Holly Tree) and a petrol station. Menstrie also has a library, small sports centre, public park, primary school, a residential establishment for older people [3] and two churches.

A conspicuous zig-zag roadway up the scarp face of Myreton Hill, nowadays used by the local farmer for access to his flocks, was originally built during the Napoleonic Wars for access to some mine workings, which produced calcite. However, the volume of material mined was rather small in proportion to the effort needed to build the road, so the venture is unlikely to have been economic. There seems to be no record of why calcite was considered to be sufficiently valuable to have justified the considerable effort.

The occupants of Menstrie once processed wool from sheep farmed on the Ochils. In 1800, businessmen from Tullibody set up a carding and spinning mill on the east side of the Menstrie Burn to exploit its soft water and power, absent from their own village.

In the early 19th century a straight road was built on the flat ground of the carse or floodplain to by-pass the old Hillfoots Road and improve the transport of goods to and from the Hillfoots villages. Menstrie's Long Row and Ochil Road lie on the old route along the foot of the hills. The new road, now the A91, became a focus for construction of churches, houses, mills and shops.

By the mid-19th century, the Elmbank and Forthvale mills were in business on either side of the Menstrie Burn.

In the 1860s a company, which included the owners of local mills and a distillery, financed a branch railway line through Menstrie to a terminus in Alva.[5] This joined the old North British Railway line between Alloa and Stirling at Cambus. Menstrie had its own passenger station at the North end of Tullibody Road. Practically nothing of the station remains and the railway branch line, which continued to carry freight after the Beeching Axe, fell into disuse during the mid-1980s in favour of road transport. 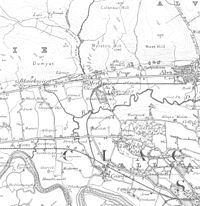 Menstrie and surrounding area in 1895

The Glenochil Distillery had opened in the middle 18th century on the site of the Doll Farm to the east of the village, beside the Dams Burn. Manufacturing has continued on this site for more than 250 years though production of whisky stopped around 1930.

Yeast, initially a by-product of whisky fermentation, had gradually become the main product and went for manufacture of whisky and bread. Soft water, locally available, is still useful. An extensive bonded warehouse area remains for storage of whisky as it matures in barrels before bottling, while bakers' yeast has given way to fermentation products derived from yeast.

The Forthvale Mill no longer stands but the Elmbank Mill,[6] having been used for some years as offices by the Water Board, now houses small businesses.

A furniture factory, The Charrier, stood near the Menstrie Burn but was destroyed by fire in about 1968. A street nearby now bears its name.

In the mid-20th Century, Menstrie had a population of between 1,200 and 1,300[7] and a greater part of its inhabitats were the miners and their families working in the Clackmannanshire Coalfield and other mines in the nearby area.

As the mining and textile industries have declined, Menstrie has become a commuter dormitory, spreading over the adjacent farmland. At the Censuses in 1991, 2001 and 2011, Menstrie's population was recorded at 2,274, 2,083 and 2,804 respectively.

Menstrie and the nearby Blairlogie are access points to Dumyat, a peak in the Ochil Hills popular with hillwalkers. Menstrie also provides access to Myreton Hill, used by paragliders.

The disused railway line served as an unofficial walking route to Tullibody over the bridge across the River Devon, and from 2007 it was developed as a new footpath to link Menstrie with Cambus.

Menstrie Castle was the birthplace of Sir William Alexander, James VI’s Chartered Lieutenant for the Plantation of Nova Scotia. Despite its name, it is described as a "three-storey castellated house",[9] and lacks many fortified features, standing as it does on low ground and constructed at a time of relative national calm. The building is now residential [10] and has won a Civic Trust award. 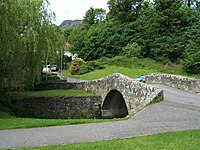 The old (pre-19th century) bridge over the Menstrie Burn is a listed structure.[11]

In 1874 [12] James Johnstone, one of the partners in the Elmbank Mill, had built for himself the Scottish baronial-style Broom Hall on the lower slope of Myreton Hill. It was burned out in the 1940s[13] and stood as an abandoned shell until 1985 when it was converted into a nursing home. It has since been refurbished as a restaurant. 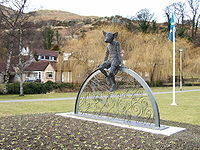 "Fox Boy", a work by the sculptor Andy Scott, stands in the centre of Menstrie in Midtown Gardens (now named the "Nova Scotia Gardens" to commemorate the village's historical connection). The sculpture combines references to the water wheels that once powered industry in Menstrie, a pet fox kept by a Menstrie child years ago,[14] and the buzzards which wheel across the skies over the village.