Marden is a village in Herefordshire, seven miles due north of the city of Hereford, in the Broxash hundred. It stands on the eastern bank of the River Lugg, which flows southward form here to join the Wye just below the city. The Layston Bridge crosses the Lugg at Marden.

Beside and now indistinguishable from Marden are two hamlets; Walker's Green and Paradise Green. The wider civil parish also includes the hamlet of Burmarsh to the south of Marden itself. 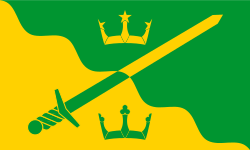 Just south of the village is an Iron Age hill fort known as Sutton Walls. It is believed that this is the place to which in 794 King Penda of the Mercians lured King Æthelbert of the East Anglians and had him murdered. Æthelbert was later declared a martyred saint. The incident inspired the village flag adopted in 2019.

In 1610 the local school was founded by Jane Shelley, the widow of one William Shelley who narrowly escape execution for his part in the Throckmorton Plot of 1583,[1] which sought to overthrow Queen Elizabeth I by foreign invasion. 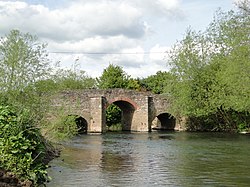 S and A Produce Ltd, a grower, packer, importer and exporter of soft fruit and asparagus are based in the village.[2][3] An investigation by The Independent newspaper in 2009 found that the firm had hired more than 2,400 people, predominantly Romanians and Bulgarians to work on its farms in Herefordshire and Kent and paid as little as £45 a week after obligatory charges had been deducted.[4]