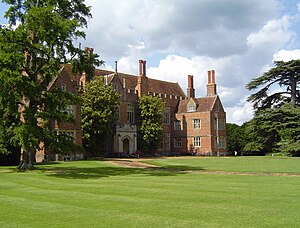 Mapledurham House is an Elizabethan stately home in Mapledurham in Oxfordshire.

The property was first held by Michael Blount and has remained with the family for 400 years. It was built at the time of the Spanish Armada in the classic Elizabethan E-shape. It includes a late 18th century chapel built in the 'Strawberry Hill Gothic' style for the Roman Catholic owners of the house. The estate covers much of the village including Mapledurham Watermill and part of the church.

The poet Alexander Pope was a frequent visitor to the house as he was enamoured of two daughters of the Blount family. The house and surrounding village were used for the filming of the 1976 film of The Eagle Has Landed and also for several television series. It is also reputed to have been the inspiration for E H Shepard's illustrations of Toad Hall for Kenneth Grahame's The Wind in the Willows, although this is also claimed by Hardwick House.