Macmerry is a large village located on the old Great North Road (now the A199) just east of Tranent.

The village has a primary school with a roll of around 100. There is an industrial estate to the east of the town. Originally this area was part of the Macmerry Aerodrome, also known as Penston, which closed in 1953.

There was a railway branch line until 1980 which served the local coalmines. 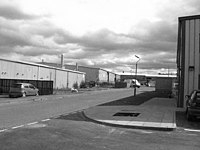 In 2009 a community based history project was launched by the Living Memory Association. The Macmerry Lives project collected memories of the school, pottery making, the aerodrome, mining industry and local farming.

Macmerry now boasts a range of facilities that have grown as the village has grown, some of these include:

Many teams from around East Lothian often play at Macmerry football pitches, while the bowling club is often busy especially on Friday nights for the league matches.